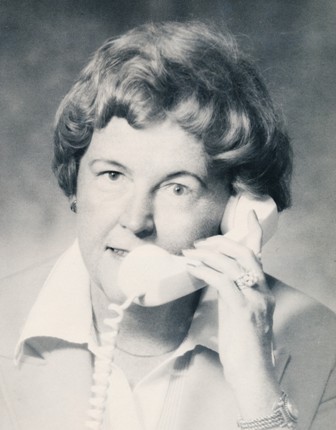 Margaret Walsh, age 92, passed away at her home in Appleton unexpectedly on Saturday evening, August 17, 2013. Margaret was born in Appleton on November 26, 1920, daughter of the late Eugene and Anna (Finnegan) Walsh. She attended the Appleton High School, as well as the local university extension and Lawrence University.

Margaret's life was one truly well lived. On a professional level, she was an inspiration to many. Filled with an entrepreneurial spirit, she rose from working out of a small room in the Zuehlke Building, to one of the first and largest telephone answering services in the Midwest. She loved adventure, travel, and the business she founded in 1949 and ran for over 40 years, Tel / Sec. But most of all, she loved her family, which consisted of her brother and sister, their children, and their grandchildren. She especially loved the little ones, no matter how many times they spilled on her carpet. She became a national leader in her industry, and served on numerous board positions in the Fox Valley. She was most rewarded by her many contributions to charity. She touched hundreds of lives by her good deeds, and was heavily influenced by her strong Catholic faith. She was an active member of St Mary's Catholic Church. She served on the Board of Directors for multiple non-profit organizations, including the Red Cross, United Way, Goodwill, CASI Foundation, St. Elizabeth Community Foundation, LEAVEN, her beloved Fox Valley Humane Association, and was the first woman chairperson at the Appleton Chamber Chamber of Commerce. In addition to serving on the board at LEAVEN, she later donated her office building for their use; it later became the home to another organization Margaret supported, NAMI. Margaret was a caring and compassionate leader. In addition to founding and running Tel / Sec, she served as president of the Outagamie chapter of the American Cancer Society, president of the Service Circle of Kings Daughters, and was the first woman president of Sales and Marketing Executives of Northeastern Wisconsin, the first woman president of the former Riverview Country Club and was the first woman board member of Associated Bank. In 1985 she started and funded C.L.A.S.P., an organization dedicated to the development of after-school programs. In 1995, she and her nephew, Rick, started Tri County Community Voice Mail in conjunction with the Salvation Army, a service to help the less fortunate find connections to jobs and housing. Margaret also worked with the Fox Valley Humane Association to form the “Brandy Fund,” named after her departed best friend and pet, and dedicated to helping dogs find homes with loving families. As a result of her countless hours of dedication to the less fortunate, the Appleton Downtown Rotary Club awarded her the coveted “Paul Harris Fellowship.” In 2003, Margaret's support of nearly 15 local non-profits earned her the Paul and Elaine Groth Mentoring Award, founded by the Mielke Family.

Margaret's business accomplishments were numerous. She was a pioneer in an industry that was in its infancy. She started Tel / Sec in 1949, working 16 hour days in a one room office in the Zuehlke Building. She later moved her business to her family home, and expanded Tel / Sec to 4 locations, at one time employing over 40 people. She also owned one of the first radio paging licenses in the state and offered “wide area” paging services to businesses in the Fox Valley. In 1983, she was joined by her nephew, Rick Schuchart, who later became president. She was the first female president of Association of TeleServices International (ATSI), and has since been inducted into its hall of fame. She attended ATSI meetings throughout the world, including trips to Europe and Australia. One of her highlights was a trip to China, back when the “iron curtain” was still a phenomenon. Margaret returned with many stories that still live on.

In 1992, Margaret retired and sold her answering service business to Alan Fromm, and sold her wireless business to her nephew, Rick. She later became restless and decided to open a cell-phone rental business. Joined by her nephew, Tom, she started Cellu/Vend, one of the first cell-phone vending-machine businesses in Wisconsin. Later, in 2000, she joined Rick and Tom in the start-up of another company, PCS Digital, LLC.

On the social side, Margaret loved parties. She was a fantastic story teller and had an Irish sense of humor that brightened every room she entered. Margaret was also an accomplished bridge player, and played almost daily with her sister Jean Ann and other close friends. She was a voracious reader and would often finish a novel in two days or less. She loved wintering in Naples, Florida with Jean Ann, and her loving companion, Pretty Kitty. Her brother Jack and his wife Betty frequently joined them. To say Margaret was a true Packer fan was putting it lightly. She never missed a game on television. On the day of her passing, she had her home decorated with green and gold, and was expecting guests for the Packers vs Cardinals game. She was a team owner, season ticket holder, and loved Aaron Rodgers. She also loved backyard barbecues with family and treasured her moments with her “grand kids,” especially during the holidays.

She is survived by her brother: Jack (Betty) Walsh of Appleton; her sister: Jean Schuchart of Appleton; six nieces and nephews: Julie Waters of Appleton; John (Tammy) Walsh of Lakeville, Minnesota; Rick Schuchart of Menasha; John (Anna) Schuchart of Madison; Ann (Mike) Albert of Blue Mounds; and Tom (Kelly) Schuchart of Appleton; as well as her beloved great-nieces and great-nephews: Seth, Katy, Deanna, Jolie, Amanda, Stephen, David, Sam, Ryan, Stephanie, Anna, Katelin, Emma, and Laura. There are also friends and associates too numerous to mention. Margaret was preceded in death by her parents, an infant brother Thomas, a brother-in-law Richard Schuchart, and Julie's husband William Waters.

The funeral liturgy for Margaret will be held at 11:00 AM on Friday, August 23, 2013 at St. Mary Catholic Church, 312 S. State Street in Appleton, with Fr. Jim Leary, OFM, Cap. officiating. Inurnment will follow in the parish cemetery. Friends may call at the church on Friday morning from 9:30 AM until the time of the funeral mass. Online condolences may be offered at www.wichmannfargo.com.

A luncheon celebration will follow the funeral mass. Additional information will be available at the church on Friday morning. Memorials may be directed to the Margaret M. Walsh fund at the Community Foundation of the Fox Valley Region.

The family would like to offer their sincere thanks to Margaret's many dear friends, including Bill and Carol Hackbarth, and her caregiver Carol Koerner.

Margaret will be sorely missed by her family and the Appleton community. The mark she left was indelible and everlasting. As one of her close friends commented recently, she LIVED until she died. God Bless you Margaret! “May the road rise up to meet you, may the wind be ever at your back, and may the good Lord hold you forever in the palm of His hand”.