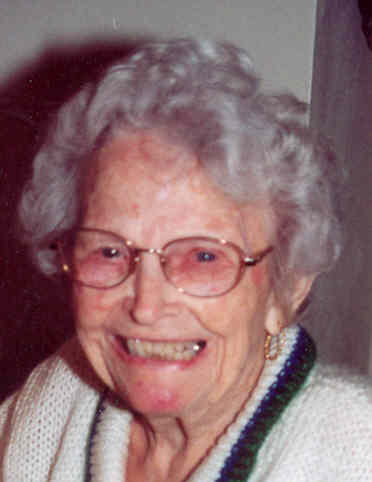 Margaret Vanderloop, faithful wife, mother of four daughters, grandmother of 11, great-grandmother of 17, eagerly went home to her dear Lord‚Äôs Kingdom of Heaven on Tuesday, June 24, 2003, just in time to rejoin her beloved ‚ÄúTony‚Äù for their wedding anniversary. Admired and loved by all that met her, she was an example of wisdom, never judgmental. For all of her 97 years, she was the most fun and pleasant person to be with.

Peg married Anton Vanderloop on June 25, 1929, and they loved and cherished each other for 54 years. She was a long-time member of St. Joseph Catholic Church, a member of the Christian Mother‚Äôs Society of St. Therese and St. Joseph, Catholic Knights, Catholic Daughters and the Third Order of St. Francis. Peg volunteered for the St. Joseph Food Pantry and St. Vincent de Paul Society. She was employed by the H. C. Prange Co. in the cashier‚Äôs office for many years, retiring in her eighties. Peg was a Packer fan, loved to listen to Brewer games, liked to have one Manhattan, was the best Sheepshead player and took all our money.

Thanks and blessings to the Oncology Staff of AMC, her doctor of many years, Dr. Guenther and his nurses, the caring staff at Franciscan Care Center, Fr. John Holly of St. Joseph Catholic Church and her watchful neighbors, Jan Ziesmer and Jeff Stafford. She was the image of love, gentleness and warmth. Life won‚Äôt be the same without you. Here‚Äôs to you Mom!

The Funeral Liturgy will be at 11:00 a.m. on Saturday, June 28, 2003 at ST. JOSEPH CATHOLIC CHURCH, 410 West Lawrence Street, Appleton, with Fr. John Holly, O.F.M. Cap. and Rev. Richard Mauthe, concelebrants. Interment will be in St. Joseph Cemetery, Appleton. Friends may call at the funeral home on Friday from 4:00 p.m. to 8:00 p.m. and again directly at the church on Saturday from 10:00 a.m. until the time of services. A memorial has been established in her name to benefit the Children‚Äôs Hospital of Wisconsin and the St. Joseph Food Pantry.
WICHMANN FUNERAL HOME
537 North Superior Street
Appleton 920-739-1231
www.wichmannfuneralhomes.com