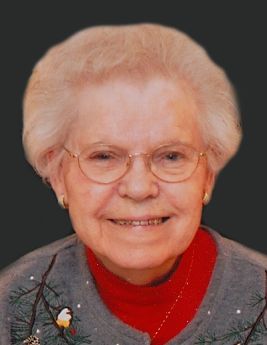 Margaret Amelia Rose Welhouse age 96, formerly of Kaukauna passed away on Friday, January 30, 2015 at Prairie Homes Elder Services in Menasha surrounded by her loving family. God saw that she was tired so he wrapped his arms around her and took her to her heavenly home. She was born on August 7, 1918 in Appleton, daughter of the late Conrad and Theresa (Forster) Grishaber. Margaret was united in marriage to Jerome H. Welhouse, the love of her life, on May 14, 1940 at St. Joseph Catholic Church in Appleton and was happily married for 67 years. Margaret was a loving devoted wife, mother, grandmother, great-grandmother, sister and sister-in-law. She was a member of St. Katharine Drexel Parish, Kaukauna. She enjoyed doing things for her family and the monthly get togethers with her sisters. They both enjoyed spending time at their cabin on Bear Lake, just outside of Lakewood, and going to the Casino. Margaret loved sitting on the dock listening to the Loons. She was a terrific homemaker, as you can still smell the homemade bread baking in her kitchen.

Margaret is survived and will be dearly missed by her three sisters and brother: Gertie Gaffney, Virginia Grishaber, Bette Wingrove and Tom (Corrine) Grishaber: sisters-in-law: Dorothy Grishaber, Ginger (Welhouse) Stuyvenbery and Maxine Welhouse, and many nieces and nephews.

The funeral liturgy for Margaret will be held at 11:30 am on Saturday, February 7, 2015 at ST. KATHARINE DREXEL PARISH, ST. ALOYSIUS CHURCH, 2401 Main Avenue in Kaukauna with Father Jerry Pastors officiating. Interment will take place at St. Mary Catholic Cemetery. Friends will be received at the church from 10:00 am until the time of mass. In lieu of flowers, memorials are being established in her name. Online condolences can be offered at www.wichmannfargo.com.

Margaret's family would like to give a very special “Thank You” to all of the wonderful people in the House of Joy at Prairie Homes Elder Services in Menasha for the loving care they gave her along with the many laughs they had together. Her family knew from getting to know all of them that Mom was being well taken care of. Her family is also very grateful to all of her doctors that cared so much, especially, Dr. Gregory Johnson. A heartfelt thank you to every one at ThedaCare At Home and Generation Hospice, for the excellent caring compassion shown to our family.