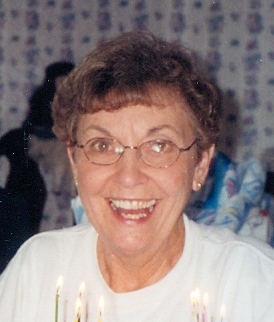 Margaret A. “Muggs” (Schuh) Van Dyn Hoven, passed away on February 21, 2015 at home after a courageous battle with cancer. Muggs was born on October 1, 1933 to Ignatius and Martha (Verhagen) Schuh. On April 15, 1952 she married Wimp and they enjoyed over 62 years together. In addition to being a homemaker, Muggs worked as a book keeper. She was a member of Holy Cross Catholic Parish and the Christian Mothers. She loved quilting with her friends, her garden, being surrounded by family and friends. She also loved car rides with Wimp, singing with the choir, playing cards with her sisters and sisters-in-law and was a great cook.

Friends may call at Holy Cross Catholic Parish, 309 Desnoyer Street in Kaukauna on Thursday February 26, 2015 from 9:00 to 11:00 am. Memorial Mass will be at the church Thursday at 11:00 am with Fr. Tom Pomeroy officiating. For more information and to express condolences, please visit www.wichmannfargo.com.

The family would like to thank the nurses and staff of St. Paul Hospice. Also, thank you to Dr. Timothy Goggins and his staff.

Thank you to Mom. You fought the good fight against cancer and in doing so helped show us how to live a life of courage and deep faith.

I will miss my best friend.
Love, Wimp