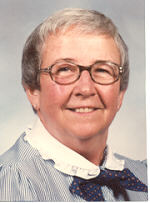 Age 84, passed away tragically in an auto accident on Wednesday, September 17, 2008. She was born in Kaukauna on July 21, 1924, the daughter of the late Arthur and Katherine (Heiting) Vandenberg. Prior to her retirement in 1986, after 43 years at Thilmany's, Marcy was one of the many girls who came to the mill during the war years to take over the duties of the men who had been “drafted.” Her work in the Wood Room and Recovery Plant was terminated with the end of the war and she was transferred to another job in the finishing department. Being a very athletic girl, Marcy enjoyed all occasions when she could enter into a game of field hockey, baseball, basketball, or bowling. Around our city she was well known for her swimming ability. We understand that dancing also had a high rating on her list of diversions. Marcy was also an avid deer hunter and will be remembered for her delicious pink fudge.

According to Marcy's wishes, her cremated remains will be buried in Holy Cross Cemetery, Kaukauna. A mass will be said at St. Katharine Drexel, St. Mary's site, Kaukauna, on her “birthday” on July 21, 2009.

The family extends a special thank you to the staff and friends at Golden Venture Apartments.