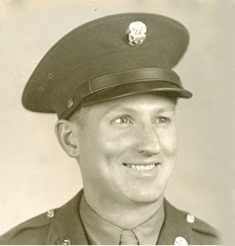 Marcus G. Nigl, 97, went to Heaven on Sunday evening, June 2, 2013, surrounded by his family in his home. Marc was born on April 25th, 1916 and had just celebrated his 97th birthday which was his goal and a very joyous milestone. He was born in the town of Bovina, Wisconsin to Joseph and Alma (Ulman) Nigl, one of five children who later moved to Kaukauna to live on his family's new farm. Upon graduation from Kaukauna High School in 1935, Marc was awarded the 'A.M. Lang Scholarship Trophy,' which he promptly presented to his mother in the audience with a hug and a smile. During the next six years, he worked at Thilmany Pulp and Paper Company. When World War II began, Marc joined the United States Army and was a cryptographer, handling secret and confidential documents in Europe. He earned the rank of Technical Sergeant. He also met many people in Europe who remained life-long friends. After the war, Marc returned to Thilmany and resumed his career.
On June 20, 1953, Marc married Elizabeth “Betty” Kieffer at Holy Cross Church in Kaukauna. Marc and Betty shared many common interests including having had the same favorite High School English teacher, Ethel Handran. Marc was a lifelong Elks member and was proud of having been the Kaukauna Elk's Secretary since the early 1950s. Marc was also a Boy Scout Master and followed the successes of his scouts into their adult years. He also was a volunteer tax helper for the AARP. Marc and Betty enjoyed giving back to the community through the Heart of the Valley Senior Service Club. They also enjoyed exercising at the Heart Institute of Appleton's Cardiac Rehab Center where they met a large group of close friends. Marc had many hobbies: he was a private pilot, enjoyed genealogy, photography, classical music, reading, but his greatest passion was gardening. His philosophy was to take nothing from the land without giving something back. Over the years he grew thousands of trees from seed and planted them from North East Wisconsin to St. Louis. He shared the bounty of his large vegetable and fruit garden with family, friends, and neighbors. Despite the health challenges of the past three years, Marc continued to tend his garden including one that grows right now.

A memorial service for Marc will be held at 11:00 AM on Saturday, June 8, 2013 at the FARGO FUNERAL HOME, 400 W. Wisconsin Avenue in Kaukauna. Friends will gather at the funeral home on Saturday morning after 9:00 AM. The Kaukauna Elks Lodge will meet for an Elks Memorial at 10:45 AM, and full military honors will follow the memorial service. Online condolences may be offered at www.wichmannfargo.com.

In lieu of flowers, a memorial fund has been established in Marc's name. The family would also like to offer their sincere thanks to the many caregivers who were so wonderful during our difficult days. They include Dr. Michael Johnson and his staff Cindy and Randi; everyone at the Appleton Heart Institute, including nurses Molly Drakas and Terri Wirth, and everyone from ThedaCare at Home. We will never forget all that you have done for our family.