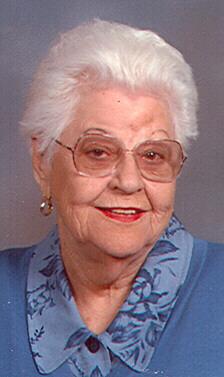 Sally Ebben, 92, passed away Wednesday November 1st while in the care of the Franciscan Care & Rehab Center on Meade Street in Appleton, Wisconsin.

She was born on July 4, 1914 in Appleton, Wisconsin. She was the daughter of Fredricka (Meltz) Mauthe and Ignatious Mauthe. Sally had one sister Marie and three brothers: Ted, Harry and George (all deceased)

She is at peace and with God now.

Sally was active all of her life and was living independently until just eight weeks ago. She was past president of the Catholic War Veterans Auxiliary, Secretary of St. Therese‚Äôs Christian Mothers, Elks Auxiliary Member, Advisory Member of the Thompson Senior Center and sang in their chorus, active with the YMCA for 18 years and a member of the Ridgeway Country Club. Sally was an avid bowler and won many trophies at the Elks Club. Sally retired from Gimbels in 1981. She also was a life long Cubs Fan and waited a lifetime for them to win a World Series, but she couldn‚Äôt wait any longer.

A Memorial Mass will be celebrated at 10:30 a.m. Tuesday, November 7, 2006, at ST. JOSEPH CATHOLIC CHURCH, 410 West Lawrence Street, Appleton, Wisconsin 54911, with Father Larry Abler, OFM Cap. as celebrant. Visitation will be from 9:00 am Tuesday until the time of mass at the church. Interment will be in St. Joseph Cemetery.