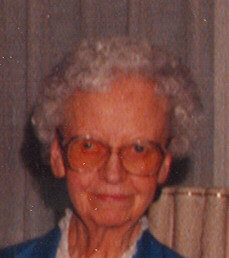 Age 97 passed away peacefully on Friday, October 8, 2004 at Franciscan Care Center in Appleton. Mabel was born in Shiocton on December 13, 1906, daughter of the late Carl and Mathilda (Witthuhn) Wolfmeyer. She attended the Shiocton High School and worked as a telephone operator until the time of her marriage. On January 31, 1929, she married Arthur Sommerfield in Milwaukee; he preceded her in death after only sixteen years of marriage in 1945. The couple lived in Milwaukee for a short time prior to moving to Appleton where she had resided since. Mabel worked for the H.C. Prange Company, Oaks Candy, and the Foot-So-Port shoe store in Appleton. She was also a founding member of the Christian Missionary Alliance Church where she sang in the choir, taught Sunday School and led the women‚Äôs bible study. She was also involved in many other areas at the church. Mabel had a great passion for serving the Lord.

Funeral services for Mabel will be held at 11:00 AM Wednesday, October 13, 2004 at the APPLETON ALLIANCE CHURCH, 2693 Grand Chute Boulevard in Appleton with Rev. Dick Schaefer officiating. Interment will be in Highland Memorial Park. Friends may call directly at the church on Wednesday from 9:00 AM until the hour of the service.

The family would like to thank Vicki Aldi, Wayne Mussatte, and Lennie Welles for their faithful visits and kindness to Mabel.

Mabel‚Äôs heart‚Äôs desire was to be with the Lord and her departed family.