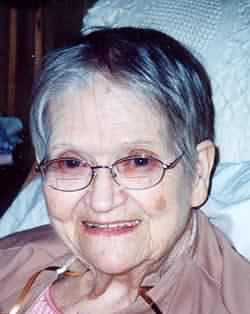 Mabel left her earthly home on Monday, March 10, 2003 at the Hospice at Cherry Meadows. She was born to Norwegian immigrants Jacob Marius Thompson (Thorstensen) and Alvilde Maria (Andresen) Thompson of Eau Claire, Wisconsin on July 30, 1915. She lived the first 22 years of her life in an area of Eau Claire that was blessed with wild purple violets, trailing arbutus, oak trees, and a wide open view of the Chippewa River. Those years were the beginning of her love for trees, gardening, and fishing. She organized the planting of 1000 evergreen trees on her northern Wisconsin acreage. Mabel loved to fish and reeled in some ‚Äúbig ones‚Äù but lutefisk was store bought. During World War II she was employed in munitions for the U.S. government.

Mabel attended E.C. Elementary schools and Eau Claire State Teachers College, now UWEC. In 1937 she moved to Appleton where she was employed by the Tuttle Press. She has lived in the Fox Cities ever since. On November 29, 1941 she was united in marriage to Charles Edmund Rigden at St. Joseph Catholic Church in Appleton.

Mabel was preceded in death by her parents, her husband Charles, an infant son Jakob Thomas, a sister Martha J. Kresse of Milwaukee, her brothers Alvin N. of Wausau, Adolph A. of Eau Claire, a brother-in-law Lawrence Strasburg of Eau Claire, a grandson Paul Dietz a son-in-law Wendell Peter Dietz both of Stevens Point, and a sister-in-law Marina (Stein) Thompson of Eau Claire.

The mass of Christian burial will be conducted on Friday, March 14, 2003 at 11:00 AM at St. Patrick Church, 324 Nicolet Blvd. in Menasha with the Rev. Roy Geenen officiating. interment will take place at St. Joseph Cemetery. Friends may call on Thursday at the Wichmann Funeral Home, 537 North Superior Street from 5-8 PM, and at the church on Friday from 10:00 AM until the time of the mass. In lieu of flowers, a memorial fund is being established for the benefit of the hospice program.

It is Mabel‚Äôs wish to be embraced by the loving arms of our heavenly father, and the spirit of her late husband, Charles.

‚ÄúWhen all is done, say not my day is o‚Äôer;
And that through night I seek a dimmer shore.
Say rather that my morn has just begun.
I greet the dawn and not a setting sun.‚Äù
Paul L. Dunbar 1831 – 1906