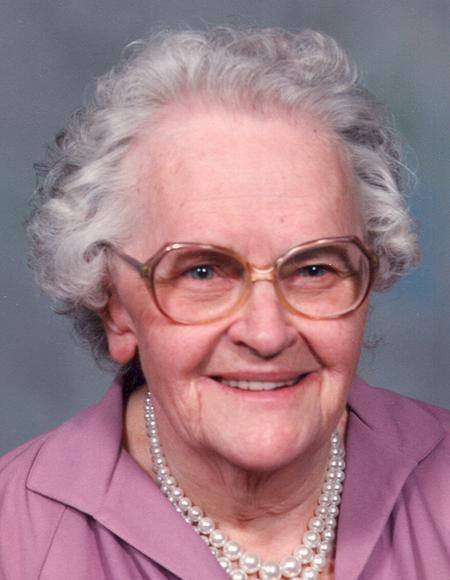 Lyla E. Ayers, age 98, passed away peacefully, surrounded by her family, at the home of her loving daughter, Nancy, in Kimberly on Tuesday, February 14, 2006. She formerly lived at 826 E. Winnebago Street, Appleton, since 1938 until moving to Kimberly two years ago. Lyla was born in the Town of Clayton, WI on December 29, 1907, the daughter of the late Fred and Clara (Elmer) Zimmerman.
On November 26, 1931, she married Aloysius L. (Al) Ayers at St. Patrick Catholic Church in Menasha upon converting to the Catholic religion. He preceded her in death on September 12, 1974. She was a member of St. Therese Parish in Appleton, where all her children attended school and also was a member of the Ladies of St. Therese. She was a charter member of the Skip-A-Stitch Club, which had been in existence since 1937. She was so proud when she was the First Place winner in the 1st Annual Kimberly Jaycees Sheepshead Tournament.
In her younger years she was a housekeeper and then a cook for the Johnson and Dr. Rogers family in Neenah before her marriage. She was a Girl Scout leader for many years, loved to knit and crochet, bake Christmas cookies and pfeffernusse, work crossword puzzles, play sheepshead, go to the casino and spend time with her grandchildren, great grandchildren and friends. She was asked by Fr. Timon Costello to volunteer as a cook when he founded Villa Hope in Appleton; a six month commitment evolved to be six years. She also participated in constructing the wall mural at the now M & I Bank on College Avenue by utilizing her crocheting skills.
She is survived by four children, 12 grandchildren, 19 great grandchildren and 1 great great grandchild. Her children are John (Lois) Ayers and their son, Steve, Sturtevent, WI; Nancy Stuyvenberg, Kimberly and her children, Paula (Mark) Van Cuyk, Kimberly and their children, Nick, Doug and Jenni; Joanne Seif and her children, Aaron and Kevin, Kimberly; Dennis (Sheila) Stuyvenberg, Weyauwega; Mary Jo (Rich) Kohl and their children, Matt (fianc√© Sarah Shefka) and Ben of Appleton; Janice (Bob) Grissman and their children, Schelby and Stephany, Kimberly; Carol (Randy) Wierschke and their children, Jason, Justin and Jared, Kimberly; Patricia (Martin) Vander Wielen of Neenah and their children, Julie (Kirby) Kitchener and their children, Jennifer and Andrew, Apple Valley, MN; Sarah (Mike) Greenheck and their children, Rachael, Catherine and Laura, Eagan, MN; Scott (Christine) Vander Wielen and their children Kaila and Breana, Kimberly; Dr. James (Nan) Ayers, Minneapolis and their children, Christopher (special friend Thasja Hoffman), Los Angeles, CA; and Collen, Minneapolis; a great great grandchild, Cameron Seif; a sister, Marion Hagenson, Menasha; a sister-in-law and brother-in-law, Sue Jane (Ayers) and Charles Hirschhorn, Texas; many nieces, nephews and friends.
Lyla was preceded in death by her son-in-law, Paul Stuyvenberg, two brothers, Allen and Elmer Zimmerman, three sisters, Laverne Hartzhein, Junette Michalkiewicz and Betty Schultz, brothers-in-law, Elmer Hagenson, Bill Hartzheim, Phil Michalkiewicz and Hank Schultz; sister-in-law, Dorothy Zimmerman, mother-in-law, Susan Ayers Heldt, father-in-law, John W. Ayers, sisters-in-law and brothers-in-law, Marsylvia (Ayers) and Joseph Nakutis, Margaret (Ayers) and Myron Bergschultz.
The funeral liturgy for Lyla will be held at 11:00 am, Thursday, February 16, 2006, at ST. THERESE CATHOLIC CHURCH, corner of Morrison Street and Wisconsin Avenue, Appleton, with Father Robert Vandenberg officiating. Interment will be in St. Joseph Cemetery, Appleton. Friends may call at the funeral home from 4 to 8 pm, Wednesday and at the church on Thursday from 9:00 am, until the time of the mass. There will be a parish prayer and scripture service at 7: 00 pm Wednesday.

The family would like to extend their gratitude to the ThedaCare Hospice Staff for their excellent care, especially Dana, Charlie, Kathy, Sally, Jamie and to the other caregivers at ThedaCare At Home, who took such compassionate care of mom and to Dr. Jack Anderson.
Your kindness, care and compassion will never be forgotten.

Life is not a journey to the grave
With the intention of arriving safely
In a handsome and well preserved body,
But rather to skid in broadside,
Thoroughly used up,
Totally worn out,
And loudly proclaiming:
–WOW‚Äî
WHAT A RIDE !!