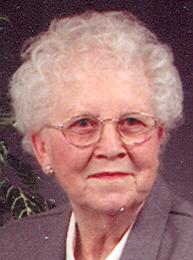 Age 89, passed away Monday, February 5, 2007, at Cherry Meadows, surrounded by her loving family as they prayed the Lord‚Äôs Prayer. The angels ushered her to heaven into the waiting arms of our Lord Jesus Christ.

She was born March 4, 1917, Reedsville, Wis., the daughter of the late John and Sophie (Staudinger) Schmidt. Ceil was united in marriage to Herman Strobl on June 26, 1937, and were blessed with 61 years together. He preceded her in death on August 27, 1998.
The Strobl‚Äôs were charter members of St. Bernadette Catholic Church and devoted parishioners. Ceil was a very active volunteer at church, and through her outstanding organizational skills used her talents to help with church picnics, the Mission Club, rummage sales, funeral luncheons, and being a hospital visitor. She was a member of St. Elizabeth Hospital Auxiliary, and the Monte Alverno Retreat Guild. Ceil also was a cook at the Retreat Center.
She loved making quilts and Christmas decorations and all of the family received her wonderful creations. Ceil enjoyed flowers, gardening, and was an avid bird watcher at her home. She reveled in feeding the bluejays with peanuts, although she was not fond of the squirrels! Everyone loved her cooking and baking, especially her apple pies. Ceil was affectionately known by her grandson as Grand-Mammy, and by her great grandchildren as Grandma Great and Cookie Grandma.

THE VISITATION WILL BEGIN AT 9:30 A.M., FRIDAY, FEBRUARY 9, 2007, AT ST. BERNADETTE CATHOLIC CHURCH, 2331 EAST LOURDES DRIVE, FOLLOWED BY THE FUNERAL MASS AT 11:30 A.M. with Father Don Zuleger as celebrant. Entombment will be at St. Joseph Cemetery. In lieu of flowers, a memorial fund in Ceil‚Äôs name is being established.

The family would like to extend their special thanks to Paul, Charlie, and Teri, of ThedaCare at Home, for their love, devotion, and friendship given to Ceil. Their deepest gratitude to the staff at Cherry Meadows for their compassionate understanding given to our Mother, to us and their endless supply of yummy cookies. To Betty from Supportive Home Care for her years of dedication. Her children bless the grandchildren for embracing their heritage and honoring their Grandmother with love, care and respect.