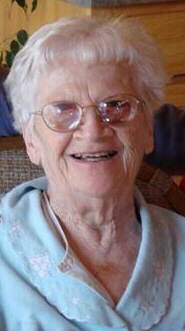 Lucille's Spirit went to heaven Friday morning, July 3, 2009, relieving her from illness. She was a fighter until the end as she was an independent and strong willed woman. Lucille always stood up for what she believed in and what she felt was right. She was always trying to be helpful to those around her. Her words of wisdom were always said with good intentions.

Born in Chicago, IL, and lived early life in Maywood, IL, Lucille had a tough childhood losing her beloved mother at a very young age. Different families took her in for a time and she managed to grow into a wonderful young woman despite the hardships and instability of her life. Later in life she took care of her father and other family members. Lucille and George met and were married on April 19, 1941. They had 5 children that they raised with love and emphasized independence, hard work, integrity and respect.

Lucille worked as a bookkeeper at Gatley's People Store in Roseland (community in Chicago) During the 60's and then at Harvey National Bank where she retired from in the early 80's. Lucille and George moved to the Heritage Retirement Community in 1992 where Lucille stayed in her own apartment until her death. She had many skills and interests throughout her life including knitting, crocheting, macramé, crossword puzzles, cards games, dancing, singing, gardening & cooking (especially the traditional Italian Christmas dinner). Lucille loved family gatherings and took pride in the food preparation, hard work and her loving family. Lucille and George were so good to each other and loved each other very much. Lucille was the strong one when George got sick and later died. She was always there for her children and grandchildren for encouragement and support. She expected all to do their best. Lucille lived a good honest life and her children are proud of her and George for their hard work and sacrifices. Lucille loved God and was a devout Catholic. She would pray often and sometimes when she lost something, prayer went out to St Francis and she would find it.

Lucille is survived by four of her children: Dave (Patty) Derrico, Mark (Sue) Derrico, Debra (Daniel) Noel, Judith (Daniel) Steidl; daughter-in-law: Claudia Derrico, Sister: Marie Flemming, 10 grandchildren, 16 great-grandchildren, and other relatives and many friends at the Heritage and back home in Chicago.

Lucille is preceded in death by her parents, George and Anna LaPlant, her beloved husband, George Derrico, her dearly missed son, Philip (Claudia) Derrico, sisters Lillian, Eleanor and Irene and many friends and family.

A Memorial Service for Lucille will be held, 11:00 a.m. Saturday, July 11, 2009 at SACRED HEART CATHOLIC CHURCH, 222 E. Fremont Street, Appleton. Fr. Robert Karuhn will officiate. A time of visitation and support will be held at the church on Saturday from 9:00 a.m. until the time of service.

A memorial fund has been established in Lucille's name.
Mom will be greatly missed by her children and all that knew and loved her.
Lucille's family would like to extend a heartfelt thank you to the staff and care givers at Heritage, Theda Care Hospice, and especially Darlene and Marie for the all their wonderful care and support. We would also like to thank Joanne Bricco, Mary Hobbins and other friends for being so good and helpful to our mother.