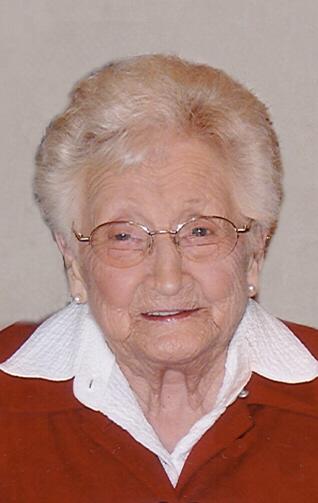 Lucille √Ø¬ø¬ΩCeil√Ø¬ø¬Ω Mader, completed her life here on earth on August 10, 2010 at the age of 96. She had been a resident of the Ridgeview Highlands Circle Senior Housing Complex in Grand Chute for 16 years and was now living at Island Shores Independant and assisted Living in Neenah, WI She was born October 7, 1913 in Appleton, WI to George J. and Salina (Piette) Barrett. After Salina died early in Lucille√Ø¬ø¬Ωs childhood, George married Julia Aldrich.

Ceil was employed by Zwicker Knitting Mills, retiring as a supervisor, after 26 years. She loved to travel, enjoyed playing cards, Friday night fish fry, spending time with her children grandchildren, and many memorable years at the cottage she and her husband built on Moshawquit Lake. One of the things she will be remembered for was her love of sports, especially the Green Bay Packers, Milwaukee Brewers and the Badgers.

A Mass of Resurrection for Lucille will be held on Friday, August 13, 2010 at 10:30 AM at ST. JOSEPH CATHOLIC CHURCH (410 W. Lawrence St.) with Fr. Larry Abler officiating. Burial will be in the St. Joseph Cemetery. A time of visitation will be held on Friday from 9:30 AM until the time of services at the Church.

In lieu of flowers, per Ceils request, memorials to the American Cancer Society, MS, Spina Bifida or Diabetes are appreciated. A special thanks to her long time physician, Dr. John Elisberg, Deacon CF, the Heartland Hospice team, Alma, Sam, Sister Ruth and a hospice volunteer friend Jean Mauthe. Also another special thanks to The Island Shores staff for their compassion and care for our mother.
Wichmann Funeral Home
537 N. Superior St.
Appleton, WI 54911
920-739-1231