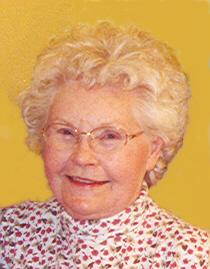 Luanna M. Schwalenberg, 86, formerly of Kaukauna, died at Prairie Home Elder Services in Menasha on Friday, December 8, after a difficult struggle with Alzheimer‚Äôs disease. God blessed her with a peaceful passing, surrounded by her five children, on the feast of the Immaculate Conception.

Luanna was born on March 6, 1920, in Kaukauna, daughter of the late Henry and Anna (Mader) Welhouse. She was a faith-filled member of St. Aloysius Catholic Church in Kaukauna.

Luanna was a loving mother, grandmother and great-grandmother. She truly enjoyed being a dedicated mother and homemaker, taking pride in her family and home. She will be remembered by her children and grandchildren for her kind and loving ways and for her many baked goods, especially her cookies and Christmas candy. She loved being at home, using her talents for sewing and decorating, and enjoyed taking care of her house and yard. Her great-grandchildren were just getting to know and appreciate ‚ÄúNana Luanna‚Äù.

She was a loving wife to her husband Raymond for 46 years. Together they raised a close-knit family and enjoyed both a special 40th and 45th wedding anniversary. Luanna was a sweet, caring person, and those whose lives she touched felt fortunate to have known her. She dedicated herself to her family, always putting them first, and felt joy in the process.

She is survived by her five children and their spouses; her son and daughter-in-law Gary & Janet Schwalenberg of Kaukauna, and her four daughters and sons-in-law: Jean & John Lamers of Little Chute, Linda & Warren Engel of Brillion, Karen & Jim Van Drasek and Sue & Bruce Vanderloop of Kaukauna. She has ten grandchildren: Lori, Daniel, Sheri and Jennifer Schwalenberg; Scott (Susie), Jamon (Patience), and Eric Lamers; Brett and Garret Van Drasek, and Lindsey Vanderloop. She also has three great-grandchildren: Christopher and Katie Lamers and Alexis Schwalenberg, with a fourth great-grandchild due in June. Luanna is also survived by her two brothers: Elmer Welhouse of Union Grove and Edward (Ardene) Welhouse of Kaukauna, her two sisters LaVerne Jonen of Appleton and Leona Gerhartz of Brillion, her sister-in-law Elizabeth Obermeyer, her life-time friend and sister-in-law, Esther Schwalenberg, her brother-in-law, David Six, and many nieces and nephews.

Luanna was preceded in death by her husband Raymond in 1990, her daughter Joyce in 1965 and her brother George Welhouse in 2004 and his former wives Fanny and Doris; also her sisters-in-law, Ursula Welhouse and Arlene Welhouse and brothers-in-law, Arthur Jonen and Claude Gerhartz, as well as her husband‚Äôs twin brother, Roland, and his sisters Anita (Melvin) Arps Six and Clara (Emmett) Wierschke.

A special thanks to all the wonderful caregivers who treated our mother with compassion and respect, who saw past the disease and appreciated the true nature of this gentle and kind woman. Your kindness and love will always be remembered. Also, a thank you to her neighbors who watched out for her during the years she lived alone.

In lieu of flowers, a memorial is being established.