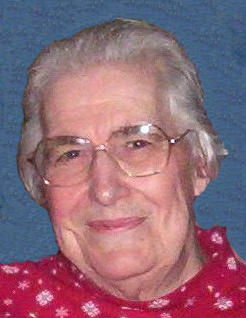 Louise Ursula McMahon, age 89, of Kaukauna, passed away on Sunday, June 17, 2012, following a long illness. Louise was born on August 3, 1922, in DePere, to the late Henry James and Rose (Le Mere) Rupiper. She married John J. McMahon on March 1, 1954, in Kaukauna; he preceded her in death on January 19, 1999. Louise proudly served her country in the United States Air Corp during World War II. She was known as the family historian and enjoyed passing on stories to the youngsters at family gatherings. Louise also enjoyed sewing and puzzles, especially Word Search. For many years she was a seamstress for area firms. Survivors include her children, Ronald Leslie (special friend, Shirley) Monarch; Donald James (Julie) Monarch; Linda Louise McMahon; Timothy John (Doris) McMahon; Thomas James McMahon; Mary Margaret (Jim) McMahon-Bullis; her sister, Margaret Beyer; her sister-in-law, Doris Rupiper; and her dear family friend, Sue Vanderloop. She is further survived by numerous grandchildren, great grandchildren, nieces, nephews, other relatives and friends. Louise was preceded in death by her daughter, Patricia McMahon; her brothers and sisters, Arnold (Virginia) Rupiper, John (Myrtle) Rupiper, Rose Vander Zanden, Richard Rupiper, Alvin Rupiper, Joseph (Cecile) Rupiper, Marie (John) Kamps, and Donald Rupiper. The Funeral Liturgy will be at 11:00 a.m. on Thursday, June 21, 2012, at ST. KATHARINE DREXEL PARISH—ST. ALOYSIUS CHURCH, 2401 Main Avenue, Kaukauna. Friends may call at the Fargo Funeral Home, 400 W. Wisconsin Avenue, Kaukauna, on Wednesday from 4:00 p.m. to 7:00 p.m. and again directly at the church on Thursday from 10:00 a.m. until the time of services. Interment will be in St. Mary Cemetery, Kaukauna, and Military Honors will be observed at graveside. Louise's family would like to extend a sincere thank you to her son, Tom, for his years of dedication to his Mom ever since his Father's passing in 1999, and also to the staff at ThedaCare Hospice—especially Leslie, Ida and Jill—for their loving care. Online condolences can be offered at www.wichmannfargo.com