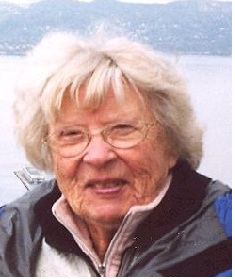 Louise Amanda Allhiser “Lou” passed away at age 98 on June 9, 2011 in Appleton, Wisconsin. She lived at the Heritage in Appleton after 1994, first in Independent Living, then in Assisted Living.

Lou was born on September 10, 1912 in Sioux Rapids, Iowa. Her parents were John F. Thompson and Gunda Petersen Thompson. As a child, she lived with her family on farms in the upper Midwest. Lou graduated with a piano major in 1934 from St. Olaf College in Northfield, Minnesota. She obtained a Master's degree in Education from the University of Minnesota, and worked as a high school English teacher in McCallsburg, Iowa, Baldwin, Wisconsin, and Sheboygan, Wisconsin.

Lou was married to Norman “Norm” Carl Allhiser on March 29, 1941 at the “Little Brown Church in the Vale,” in Nashua, Iowa. For most of their fifty-one years of marriage, they lived in Madison, Wisconsin where Norm was a teacher and administrator of business and management at the University of Wisconsin. Lou was an extraordinary homemaker and sidelined as an organist at Midvale Lutheran church.

Lou's surviving relatives include her son John (Carin) Allhiser of Appleton; and a daughter: Mary Allhiser of Menlo Park, California; a granddaughter: Kirstin (Rusty) Zaspel of Menasha; a grandson Jesse Allhiser of Little Chute and his fiancée Gloria McIntyre of Little Chute; and the most recent joy of her life, her great-grandson, Oliver Zaspel. There is also a sister-in-law: Arlene Hearn of Phoenix. Lou was preceded in death by Norm in 1992, and by her parents, her sister Geneva, and her brother Troy.

Lou's family deeply appreciates the warm and stimulating relationships that Lou had enjoyed with residents of the Heritage and the wonderful care provided to her by the staff of Heritage Woods Assisted Living and more recently by Theda Care Hospice.

There will be a memorial service at 11:00 AM on Monday, June 13, 2011 at PRINCE OF PEACE LUTHERAN CHURCH, 2330 E. Calumet Street in Appleton. Rev. Gary Nokleberg and Rev. Roger McQuistion will officiate. Friends may call at the church on Monday from 9:00 AM until the hour of the services.

Lou was a classy lady, an inveterate traveler, and a proud matriarch. What she gave us will not be forgotten.