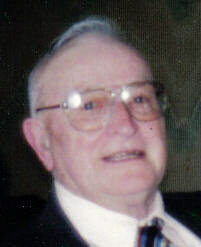 Louis H. Borree
“Louie”
St. Paul Home, Kaukauna
Age 93, passed away on Saturday, October 11, 2008. He was born December 4, 1914 in the town of Harrison, son of the late Louis and Bertha (Haase) Borree. Louis served in the Navy as a Seabee during WWII. He married Rose Pomeranka on February 26, 1945 in Menasha. She preceded him in death in 1998. Louis worked at Thilmany Pulp and Paper and retired in 1977 after 36 years of service. He was a member of Trinity Evangelical Lutheran Church, Kaukauna, the Quarter Century Club and the American Legion. Survivors include a son, Thomas (Diane) Dunedin, Florida; a daughter Barbara (Gary) Jakobi, Marathon, Wisconsin; and a granddaughter, Kimberly, Atlantic Beach, Florida. He is also survived by two brothers, Ray (Janet) Borree, and Ralph of Kaukauna, a sister, Mildred Beford, Appleton, and nieces and nephews. Louis was preceded in death by seven brothers, and one sister.

The Christian Funeral for Louis will be held at 11 a.m. on Wednesday, October 15, 2008 at TRINITY EVANGELICAL LUTHERAN CHURCH, 804 Grignon St., Kaukauna with Pastor Karl Schultz officiating. Visitation will be held at the church from 9 a.m. until the time of services. Burial will be in Highland Memorial Park, Appleton.

The family would like to thank the staff at St. Paul Elder Services for all their care and support.