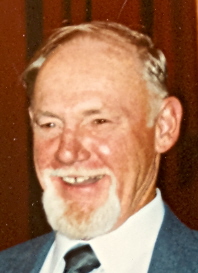 Louis B. Monday, age 77, passed away at his home in Kaukauna on Wednesday, April 4, 2012. He was born on September 5, 1934, in Kaukauna, the son of the late Joseph and Agnes (Collett) Monday. Ben served his country in the Korean War and was in the Army for six years. He worked for Wisconsin Natural Gas Company (now WE Energies) for 37 years. Ben's happiest days were living in Pickerel. He loved the outdoors, hunting, fishing, walking in the woods with his dog Sparky, and putting around the lake on his pontoon.
Ben has three children: Tim (Anne) Monday; Scott (Pam) Monday and Karen (special friend Glenn) Monday; two grandchildren: Christopher (Shannon) Monday and Jennifer Monday.

The funeral liturgy for Ben will be held at 4:00 pm on Tuesday, April 10, 2012 at HOLY CROSS CATHOLIC CHURCH , 309 Desnoyer Street, Kaukauna. Fr. Tom Pomeroy will be officiating. Inurnment will take place at Highland Memorial Park, Appleton. The family will receive relatives and friends on Tuesday at the church from 2:00 pm until the time of mass. In lieu of flowers, a memorial fund has been established in his name. Online condolences can be sent to www.wichmannfargo.com.

Ben courageously fought cancer for six years. We would like to thank Dr. Jack Anderson, Dr. Kevin Mortara. Dr. Jack Swanson and ThedaCare Hospice, especially his nurse, Dawn, for her outstanding compassion to our family.

We would also like to thank Dr. David Koeper and the Kaukauna Fresenius Dialysis Center, especially Shari and Lori for taking such good care of Ben.