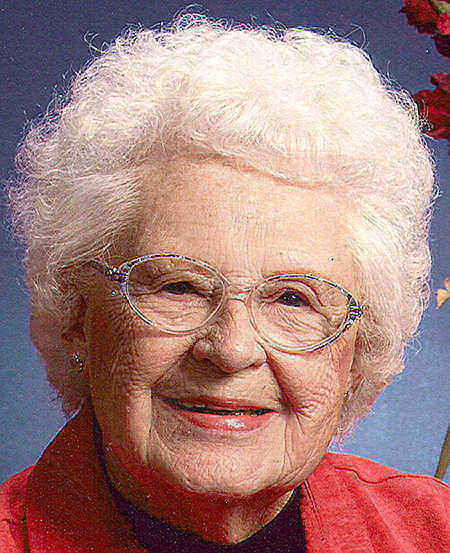 Young at heart forever, Lorraine M. Krueger, age 86, of Appleton, passed away unexpectedly, Tuesday morning, March 11, 2008. She was born December 2, 1921, to the late Emery and Thora (Mortenson) Pepin, in Chippewa Falls, WI and attended the University of Wisconsin-Madison, where she met her husband, Edward V. Krueger. When Ed entered military service, Lorraine moved to Bonduel and following his discharge they moved to Appleton where they lived for over 50 years. She was devoted to her family and friends and helping others. She had been actively involved with her church, she was an accomplished pianist and enjoyed golf, camping and travel. Lorraine was a member of Emmanuel United Methodist Church and a member of the choir for many years, she enjoyed singing with the Harmonettes, a musical group which sang locally and competed in national competitions. She was also a member of the Oney Johnston-Edward Blessman American Legion Auxiliary Unit #38, the Harvey Pierre VFW Post #2778 Auxiliary, the Church Women United, and the Golden K Kiwanis. She volunteered at the Salvation Army, Outagamie County Museum and the Clothes Closet. Lorraine is survived by four sons, Thomas (Mary) Krueger, Indianapolis, IN; David (Polly) Krueger, Mansfield, TX; James (Kathleen) Krueger, Wauwatosa, WI; Stephen (Maureen) Krueger, Sheboygan; 8 grandchildren, Julie (Karl) Koppelmann, Geoffrey (Kerri) Krueger, Kellie (Daniel) DeRango, Andrew (Elizabeth) Krueger, Sean (Julie) Krueger, Chad (Aidee) Krueger, Matthew (Erin) Krueger and Amanda Krueger; 10 great grandchildren, Leah Koppelmann, Mitchell Koppelmann, Leah Koppelmann, Maeghan DeRango, Mollie DeRango, Maximus DeRango, Quinn Krueger, Sophia Krueger, Tatum Krueger and Casey Krueger; a sister, Phyllis (Max) Aldworth, Madison; and a sister-in-law, Martha Pepin, Mishawaka, IN. She was preceded in death by her husband, Edward V. Krueger, November 20, 2000, and her brother Robert Pepin. The funeral service for Lorraine will be held at 11:00 am, Saturday, March 15, 2008, at Emmanuel United Methodist Church, 740 East College Avenue, with Reverend Mark Geisthardt officiating. Burial will be in Appleton Highland Memorial Park. Friends may call at the funeral home from 4 – 8 pm, Friday and on Saturday at the church from 10:00 am, until the time of the service. There will be and American Legion and VFW Auxiliary visitation at 7 pm, Friday, at the funeral home. A memorial fund is being established for Emmanuel United Methodist Church.