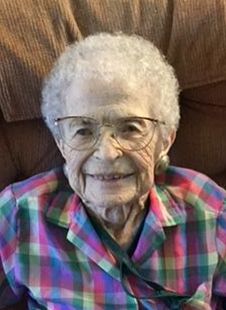 Passed away on November 11, 2017 at the age of 97 at St. Paul Villa in Kaukauna. Lorraine was born on November 7, 1920 in Green Bay, Wisconsin to Lamont and Arleen Ewalt.

Lorraine graduated from Green Bay West High School in 1938. She received her Bachelor’s Degree from the University of Whitewater. Lorraine and Warren were joined in marriage on August 4, 1943 before Warren went overseas to fight in WWII. After the war, they returned to Wisconsin where they spent the rest of their lives. Lorraine taught typing, shorthand, and bookkeeping throughout much of her career, and retired from the Kimberly School System in 1982. She and Warren spent many happy retirement years traveling around the country. They continued to live in Kimberly until 2016 when they moved to The Villa at St. Paul’s Elder Services in Kaukauna.

Lorraine is survived by Warren, her loving husband of 74 years and their daughter Sara Jarvis. Dear sister of Elaine Kauth and Judy Gerl, half-sister Sandra Martinez and half-brother Peter Ewalt. Lorraine is preceded in death by her parents, stepmother Vivian Ewalt and her sister Lois Ewalt.

Memorial visitation will be held in the Schmidt Chapel at St. Paul Elder Services, 316 E. 14th Street, Kaukauna, on Friday November 17, 2017 from 1:00 PM to 2:00 PM. Mass of Christian Burial at 2:00 PM. Private interment at Highland Memorial Park. Memorials to a charity of your choice in Lorraine’s name are appreciated.

Lorraine’s family wished to express their appreciation for the care she received from the St. Paul’s staff at The Villa, the Outreach Program, and the Hospice Program.