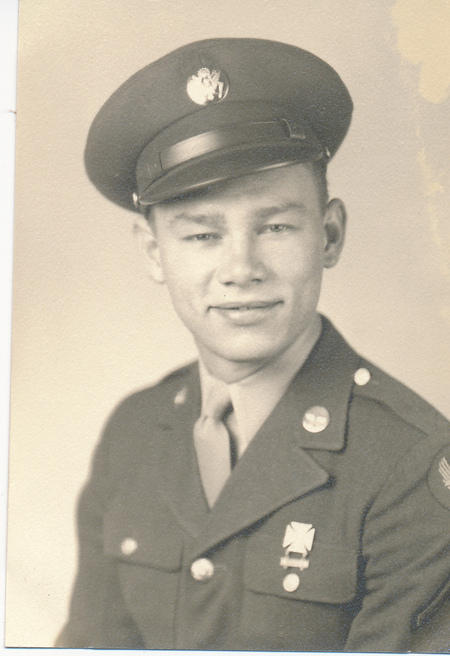 Lloyd W. Mueller, age 88, of Appleton, peacefully departed this life on Saturday, August 13, 2011, at his home after a short illness and entered the Glory of Eternal Life. Lloyd was born on August 13, 1923, in Center Valley, the son of the late Alvin and Selma (Techlin) Mueller. He was baptized at St. John Lutheran Church, Center, and was confirmed at Mount Olive Ev. Lutheran Church, Appleton. Lloyd resided in Appleton his entire life and graduated from Appleton West High School in 1941. He proudly served his country in the United States Army Air Corps from 1942 to 1946, serving in Iraq and other air bases in the Middle East. After returning to Appleton, he married Lucille Steinberg on August 9, 1947, in Hortonville. Lloyd worked for his father at Mueller Lumber Company for ten years and then started his own company as a residential builder. He later became a member of the Fox Valley Board of Realtors. Lloyd was a life-long member of Mount Olive Ev. Lutheran Church in Appleton. He was co-chairman of the Building Committee when the church moved from its downtown location. Lloyd also served in many offices in the church and was a Sunday School teacher for over 25 years. He began singing in the choir after his confirmation and continued for over 70 years. Lloyd served on the Board of Regents at Fox Valley Lutheran High School and served as treasurer of the school. He volunteered at the Salvation Army, the American Red Cross and the Thompson Center. Lloyd enjoyed hunting, fishing, bowling and, after his retirement, golfing. With Lucille, he wintered in Florida. Lloyd liked to spend time on his tree farms and working with his hobby saw mill. He was a firm believer in planting at least 10 trees for every one cut down. Survivors include his loving wife of 64 years, Lucille; his children, Sharon (John) Stephen, Simpsonville, South Carolina; Sandra (Lee) Neumann, Forest Lake, Minnesota; Charlene (Rick) Bingner, Spartanburg, South Carolina; and Richard (Joan) Mueller, Appleton; his four grandchildren, Daniel (Jessica) Mueller, Hawaii; Andrea (Ryan) Bonell, Kenosha; Angela (Tyner) Elgin, Tennessee; and Kristen Bingner, South Carolina; and his great grandson, Mason Lloyd Mueller, Hawaii. Lloyd is further survived by his sister, Virginia Fritz, Florida; his brother, Dave (Betty) Mueller; his sister-in-law, Gladys (Jim) Schroeder, Shawano; and many nieces, nephews and other relatives. He was preceded in death by his step-mother, Mabel, and his brother-in-law, Wil Fritz. The Funeral Services will be at 11:00 a.m. on Wednesday, August 17, 2011, at MOUNT OLIVE EV. LUTHERAN CHURCH, 903 E. Florida Avenue, Appleton, with Rev. Robert Raasch officiating. Friends may call directly at the church on Wednesday from 9:30 a.m. until the time of services. Military Honors will be observed at the church following the services. Entombment will be in Highland Memorial Park, Appleton. In lieu of flowers, memorials to Mount Olive Ev. Lutheran Church or Fox Valley Lutheran High School would be appreciated. The family would like to extend a sincere thank you to all of the caring staff of ThedaCare Hospice and HomeInstead Senior Care.