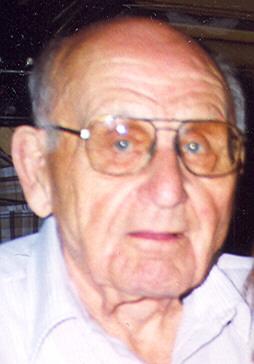 Age 90, passed away on Wednesday, November 3, 2004 at St. Elizabeth Hospital. He was born on September 13, 1914 in Forest Junction, WI the son of the late Levi and Anna (Krueger) Broehm. He was employed by Wisconsin Electric Company for 42 years retiring in 1979. Lester was a former member of Emmanuel United Methodist Church. He enjoyed hunting and fishing, the Packers, old time music, looking after his roses, and playing Sheepshead.
He is survived by his daughter DeAnn (Donald) Nymoen of Iola, WI, two grandchildren Gary (Sharon) Nymoen of Florida, and Jeff (Sandra) Nymoen of Texas; and great grandchildren: Jessica and Jonathan Nymoen, and Chad, Wyatt, and Rier Nymoen, and nieces, nephews, and other relatives. He was preceded in death by four brothers: Alfred, Eldon, Roman, and Elmer Broehm; and four sisters: Grace Spletter, Ada (Frank) Ott, Irene (Karl) Wedeward, and Flora (Harold) Kosbob.
A funeral service will be conducted on Monday, November 8, 2004 at 7:00 PM at the Wichmann Funeral Home with the Rev. Mark Geisthardt officiating. Interment will take place at Highland Memorial Park. Friends may call at the funeral home on Monday from 5:00 PM until the time of the service. A memorial fund is being established.