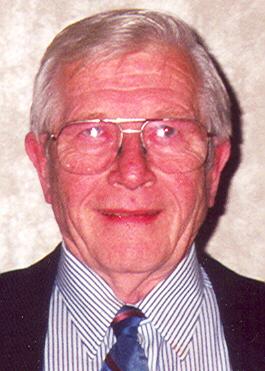 Leslie ‚ÄúLes‚Äù Nelson, age 74, of Appleton, passed away Thursday, April 28, 2005, at Cherry Meadows. He was born October 8, 1930, in Sun Prairie, Wisconsin, the son of the late Naaman and Freda (Trinrud) Nelson. Les married Patricia C. ‚ÄúPat‚Äù Christoph in Cottage Grove, Wisconsin, on November 4, 1950.
Les was a graduate of Sun Prairie High School. He enlisted in the United States Air Force during the Korean Conflict, and was stationed in Albuquerque, New Mexico with the Atomic Energy Division. After his enlistment was complete, the Nelsons came back to Cottage Grove, Wisconsin, and Les began working for US Rubber Company in Stoughton. Three years later, they moved to Mt. Clemens, Michigan, where Les worked for Ford Motor Company. In March of 1963, they moved to Appleton, and Les began his career with Appleton Paper and Kimberly-Clark for over 27 years, retiring in 1995.
Les was a long-time member of the Badger Midget Auto Racing Association, and was a former member of their Board of Directors. He was instrumental in helping capture the midget championships in 1997 and 2002 and the national midget Driver of the Year Award consecutively in 2002 and 2003. These accomplishments truly highlighted and complimented his involvement for 57 years in racing. Les was also a past member and participant of the Fox River Racing Club.
He and Pat enjoyed trips together to New Mexico, Denver, Gulf Shores, and Las Vegas, as well as other destinations. He was a member of the American Legion, William Verhagen Post #60, Kimberly. Les and Pat were original members of Father Glenn‚Äôs Mission Club, assisting for over 30 years with community projects.
Les was very family oriented, he loved his wife, children, and grandchildren, and had a great sense of humor. He was a very spiritual person and truly was a gentle man. ‚ÄúHis love was his family, his passion was racing‚Äù.

Survivors include his wife of 54 years, Patricia ‚ÄúPat‚Äù Nelson, of Appleton; his children, Lori (Steve) Hammerseng, of Appleton, Bryan (Wendy) Nelson, of Weyauwega, Gregory (Julia) Nelson, and Alicia (Alan) Wildenberg, all of Appleton; there are eight grandchildren, Crystal Flaherty, Amy Nelson, Stephanie Nelson, Tyler Hammerseng, Cale Wildenberg, Troy Wildenberg, Sam Nelson, and Anna Nelson; and his sister, Doris (Lloyd) Stapelmann, of Cottage Grove. He was preceded in death by his granddaughter‚Äôs husband, Jeff Flaherty, and an infant brother and sister, Billy and Shirley.

Funeral services for Les will be at 11:00 A.M. Monday, May 2, 2005, at WICHMANN FUNERAL HOME, 537 North Superior Street, Appleton, with Rev. Paul Feider officiating. Entombment will be in Appleton Highland Memorial Park Cemetery. Friends may call on Sunday at the funeral home from 4:00 p.m. ‚Äì 8:00 p.m., and again from 10:00 a.m. Monday until the time of services at the funeral home. A memorial in Les‚Äô name is being established.

The family would like to express a sincere thank you to Dr. John Swanson and his staff, the oncology staffs at Appleton Medical Center and Cherry Meadows, and to his special nurse, Brooke, on Four North at AMC.