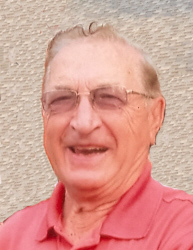 Les Hooyman, 88, Freedom, passed away on October 11, 2013 at Appleton Medical Center. Les was born on November 30, 1924 in Freedom to the late Tony and Minnie (Vanderloop) Hooyman. He was a graduate of Freedom High School where he and his future wife Jean served as Prom King and Queen. In 1946 Les married his High School Sweetheart, Kathleen “Jean” Maulick and they enjoyed over 67 years together. Les owned and operated Hooyman's TV and Appliance in Freedom for many years. Family always came first to Les and at work, his customers were family. He was a loving husband, father and grandfather. He was a man of Godliness, honesty, integrity and responsibility but also had an awesome sense of humor. Les was a member of St. Nicholas Catholic Church, past president of the Freedom Lion's Club and a former member of the Freedom School Board. Les loved spending time at the family cottage near Crivitz, loved the outdoors and especially loved hunting and fishing. He also loved raising his English Setters, playing cards and bowling. Les was an avid Packers and Cubs fan, was a former undefeated High School Boxing Champ and basketball coach in his early years.

He was preceded in death by his parents, brothers Ray, Ralph and Robert Hooyman and one sister Mary Hooyman.

There will be funeral services for Les on Monday October 14, 2013 at St. Nicholas Catholic Church in Freedom at 12:00 noon. Friends may call at the church from 9:00 am Monday until the time of the service. Fargo Funeral Home of Kaukauna is assisting the family. Online condolences may be expressed at www.wichmanfargo.com.