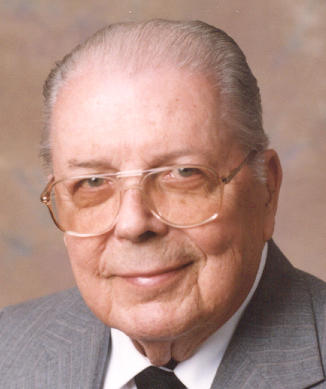 Leroy J. Klein, age 91 years and 4 months, died Saturday evening, March 29, 2008 at Grand Horizons, Appleton. He was born December 1, 1916 in Kimberly, the son of the late Joseph and Ann (Welhouse) Klein. On May 1, 1940, he married Kathryn Schwalbach at Holy Angels Catholic Church, Darboy and enjoyed 50 years of marriage before her death in 1991. Leroy attended Kaukauna High School and worked at Thilmanys from 1940 until his retirement in 1978. He was a member of Holy Cross Parish, the Quarter Century Club, Kaukauna Elks Lodge and AARP.

The funeral liturgy for Leroy will be held at 11:00 am on Tuesday, April 1, 2008 at HOLY CROSS CATHOLIC CHURCH, 309 Desnoyer Street, Kaukauna with Fr. Marty Fox officiating. Leroy will be laid to rest beside his wife Kathryn in the parish cemetery. Visitation will be held at the church at 9:30 am until the time of mass.

Many thanks to the staff at St. Paul Manor, Kaukauna, Grand Horizons, Appleton and Heartland Hospice for the wonderful care given to Leroy.