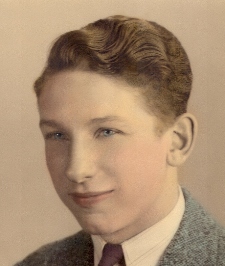 Leroy Heimerman, age 85, passed away on Wednesday morning, March 9, 2011, at the Appleton Medical Center. Leroy was born in town of Center on May 10, 1925, son of the late Jake and Gretchen (Winters) Heimerman. Following high school, Lee served his country in the United States Navy. Shortly after his discharge in 1946, he married the former Marie Hollenback at St. Joseph Church in Appleton; she preceded him in death in 1996. In 1998, Lee married Pauline Johnson; she survives and lives in Appleton. For most of his life, Lee worked as a car salesman at many dealerships around the Fox Valley. In his retirement, he enjoyed his work driving school bus for Lamers. In his younger years, Lee enjoyed bowling, baseball, golf, and basketball on television. Later he and Pauline enjoyed making, framing, and gifting jigsaw puzzles to family and friends.

The funeral liturgy for Lee will be held at 11:00 AM on Saturday, March 12, 2011 at ST. JOSEPH CATHOLIC CHURCH, 410 W. Lawrence Street in Appleton, with Fr. Jim Leary, OFM, CAP officiating. Interment will be in the parish cemetery. Friends may call directly at the church on Saturday morning from 9:00 AM until the time of the service.

The family would like to thank everyone at Fox River Assisted Living, especially all of Lee's “sweeties” who cared for him over the past several months. Your care and compassion will never be forgotten.