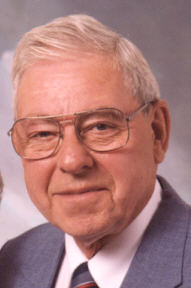 Age 72, passed away on Saturday, July 14, 2001 surrounded by his family at his home, following a courageous battle with cancer. Bud was born in Appleton on February 23, 1929, the son of the late Charles and Alice (Nooyan) Schell. On August 23, 1947, Bud married the former Patricia Ranquette in Kaukauna; she survives.

Bud was employed for many years at Thilmany Pulp and Paper, mainly servicing the heating, ventilation, and air conditioning equipment, and was a member of the Quarter- Century Club at Thilmany. In his younger years, he enjoyed bowling and golf, and in his later years enjoyed spending time with his family. Bud especially looked forward to attending his grandchildren‚Äôs activities.

The funeral liturgy for Bud will be held at 11:00 AM on Wednesday, July 18, 2001 at HOLY CROSS CATHOLIC CHURCH, 309 Desnoyer Street in Kaukauna, with Fr. Jack Mullarkey officiating. Interment will be in St. John Cemetery, Little Chute. Friends may call at the funeral home on Tuesday from 5 ‚Äì 8 PM and again at the church on Wednesday from 10 AM until the hour of the liturgy.