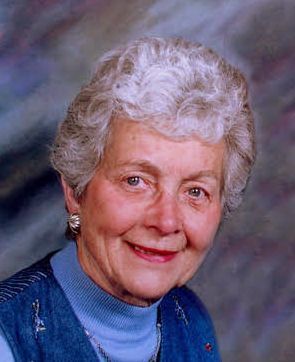 Leone Henrietta (DeGroot) Berg passed away peacefully on September 20 2016, after 92 wonderful years. Marilyn, her daughter, and her grandson Eric were with her. She was born in Niagara, Wisconsin on November 30, 1923, to Nellie and James DeGroot. They eventually moved to Kimberly then Little Chute where she graduated from St. John's High School. She worked at Fox River Paper Mill until Jerry “Bud” Berg married her April 19, 1947, after his military service.

The couple then moved to Detroit, Michigan where Leone took great joy raising their four kids: Marilyn (Dale) Nordquist, Mark (Dawn) Berg, Arlene Berg (died at age 3) and Ken Berg (Beth died at 48). Leone was a devoted Mom, homemaker and wife with Jerry for sixty-one years when Jerry passed away in 2008. They spent twenty-one years in Detroit, six in Minneapolis and then thirty-three in California.

They always made time to come back to Appleton each year to spend time with family. Leone was involved with the church choir and volunteered at different charities including the American Cancer Discovery Shop in California. Leone loved to garden and socialize with many dear friends from all over. They enjoyed traveling in their Airstream trailer, as well as visiting many foreign countries.

They have seven grandkids: Eric, Keith, Craig, Katie, Kyle (Kendra), Grant and Megan, and one of Leone's highlights was a 90th Birthday party in Minneapolis where all seven attended. Leone moved back to Appleton in 2011 and has enjoyed being at the Appleton Retirement Center since. In addition to her children and grandchildren, Leone is survived by her sister Helen DeGroot of Appleton, as well as many nieces and nephews, other relatives, and many friends. She was preceded in death by her parents, her husband Jerome and his parents, her sisters Evelyn (Jack) Dolan, Geri (Carlton) Berg, Arlene, and Eunice; her brother Clayton (Jeanette) DeGroot; and a daughter-in-law Beth.

The funeral liturgy for Leone will be held at 11:30 AM on Tuesday, October 4, 2016 at St. Pius X Catholic Church, 500 W. Marquette Street in Appleton. Family and friends are invited to gather at the Wichmann Funeral Home, 537 N. Superior Street in Appleton on Monday, October 3, from 5:00 PM until the time of a prayer service at 7:00 PM. Visitation will resume Tuesday morning at church from 10:30 AM until the time of the service. For more information or to share a memory of Leone, please visit www.wichmannfargo.com.

Memorial contributions may be directed to a memorial fund in Leone's name, which will benefit some of her favorite charities.

The family would like to thank everyone at the Appleton Retirement Center for their loving care of Mom. We will never forget your compassion and kindness.

Leone will be forever remembered as a kind and gentle woman who was well loved by all who were blessed to know her. She will be dearly missed by those she leaves behind.