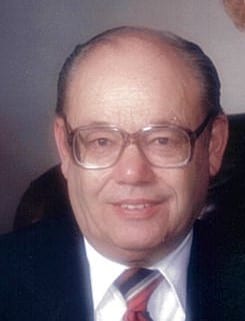 Leonard Eugene Rudie, 91, of Appleton, Wisconsin, passed on peacefully Thursday, March 5, 2020 at Appleton Theda Care Hospital within the loving presence of family.
Len came into this world in Bonduel, Wisconsin as a proud Norwegian on March 29, 1928, the son of Rudolph & Elizabeth (Erb) Rudie.
Following his high school graduation at Bonduel, Len enlisted in the U.S. Marine Corp., Air Platoon (Korean War), serving with Crash & Rescue. Upon completing his years of service, Leonard attended UW-Madison for 4 years receiving a B.S. Degree in Economics in addition to a degree in Agriculture & Dairy management. In future years he graduated with a Master’s Degree in Public Health from UM-Minneapolis.
Leonard would tell you, that the greatest years of learning, truly began, when as a student at Madison, rooming at a home on Dayton Street, he met Veta Mae Robertson (who he named “Pennie” the “Girl Next Door”) with her 3 little daughters. They married in 1955 and Leonard became an “instant” father who throughout the years more than deserved the title “Our Dad” and “Papa”.
His career started as a Health and Product Inspector with the Department of Agriculture and culminated at the Appleton City Health Department, initially as Sanitarian and Lab Director and retiring as Director of the Department.
Len had a gentle spirit that was guided by his walk with the Lord. “Be still and know that I am God…” Psalms 46:10 would best exemplify his trust in his Savior and lead to a “Peace that passes all understanding” Phillippians 4:7.
Len is survived by his three daughters; Mary Lee (Gerald) Gatzke, Sandra Kay (Richard) Hardt, and Jeanne (Jeff) Nooyen; seven grandchildren, Jeremy (Hillary), Justin (Erika) and Joseph Gatzke, Ryan (Nicole) Hardt and Karissa (Josh) Ring, and Katherine (Phill) Nooyen-Brown, Nicholas (April) Nooyen, nine great-grandchildren, Raymond, Rudy, Gretchen Gatzke, Croix Gatzke, Norah Hardt, Parker Ring, Jocelyn and Gabriel Nooyen and Daniel Brown, his brother Dale Rudie as well as one niece and several nephews and other relatives and friends.
He was preceded in death on this earth, by his parents, his wife “Pennie” Rudie, a daughter Diane Louise Rudie, a sister Marion (Rudie) Harp, and a great grand-daughter Elise Kay Ring.
Marilee, Sandie, and Jeanne are honored to celebrate the life of their Dad and Papa, Leonard E. Rudie on Wednesday, March 11, 2020 at 11:00am at Wichmann Funeral Home, 537 N. Superior Street in Appleton with full military honors to follow. There will be a visitation at the funeral home on Wednesday from 10:00am to 11:00am. Interment will be at Highland Memorial Park in Appleton. For more information and to express condolences, please visit www.wichmannfuenralhomes.com.
Our family wishes to give special thanks to the staff and nurses at Carolina Assisted Living and ThedaCare Medical Center of Appleton for the care and comfort they provided.