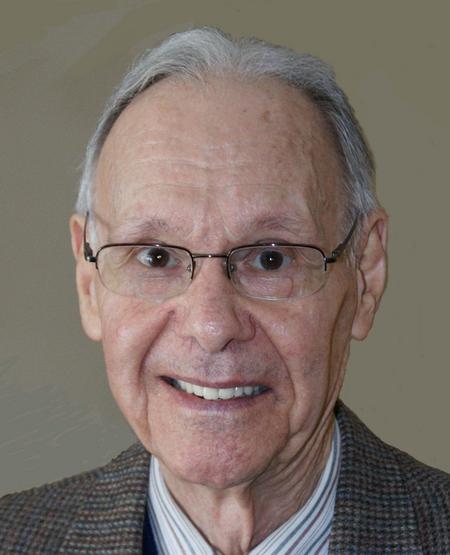 Leonard Beard was born in Blooming Prairie, Minnesota on January 18, 1922, son of the late Herbert and Clara (Leisner) Beard. As a young man, he graduated from Barnum, Minnesota High School, and enrolled in the Dunwoody Industrial Institute. He graduated in 1943. During World War II, Len served in the United States Army, and was discharged with the rank of First Lieutenant. On September 7, 1946, he married the former Letha Rowena Herrbold at St. Thomas Episcopal Church in Menasha. Len was employed by IBM for fifty years. He enjoyed his work of managing a team of customer service engineers. He was also an active and faithful member of All Saints Church in Appleton where he and Letha sang in the choir for thirty-five years and also performed marionette programs together. Len was also a volunteer in the church vestry. For many years he volunteered at the Salvation Army and Meals on Wheels, and will be remembered also for helping with the Yellow Brick Road at the Appleton Medical Center. Len loved camping and vacationing with the family, visiting family around the country, reading, working in his yard and garden, and manning the phone banks at election time.

Len is survived by four sons: Paul (Lisa Davis) Beard of Las Vegas; John (Fran) Beard of Washington, D.C.; David (Carol) Beard of Appleton; and Thomas (Lisa) Beard of Madison; five grandchildren: Paul, Matthew, Jennifer, Jacob, and Madeline; a brother: Sam (Ardis) Beard of Seattle; and a sister-in-law: Rosalie Beard of Gig Harbor, Washington. Len is further survived by many nieces, nephews, other relatives, and many friends. He was preceded in death by his parents, his wife Letha in 2008, granddaughters Sarah and Natalie, a brother Ray Beard, and a brother-in-law Phil (Phyllis) Herrbold.

The funeral service for Len will be held at 10:30 AM on Saturday, September 1, 2012 at ALL SAINTS EPISCOPAL CHURCH, 100 N. Drew Street in Appleton, with Fr. Patrick Twomey officiating. Interment with full military honors will follow at Highland Memorial Park. Friends may call directly at the church on Saturday morning from 9:00 AM until the time of the service. Online condolences may be offered at www.wichmannfargo.com. In lieu of flowers, memorials may be directed to All Saints Episcopal Church or the Salvation Army.

The family would like to offer their thanks to the wonderful kind care givers at Heartwood Homes and Theda Care Hospice for the excellent care in his final days. You will never be forgotten.

Len was known by all as a true gentleman, who never had a harsh word. He was even-tempered, calm, and warm at all times, and loved and supported his family very much. He will be sadly missed by all who knew and loved him.