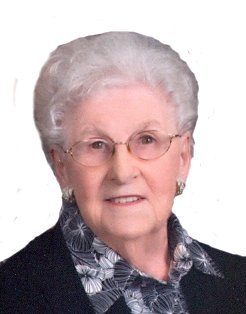 Leona Woller, age 92 and formerly of Kaukauna, passed away at her home in Lake Tomahawk on Friday, June 10, 2016. She was born in Merrill on March 14, 1924 and married Roy Woller on May 22, 1948 in the Marathon County town of Berlin. They shared nearly 68 wonderful years together.

As a young woman, Leona worked at Weinbrenner Shoes in Merrill, where she served as the union steward for 11 ½ years. Eventually she left that job to become a wife, mother, and grandmother. Leona was well known for her homemaking skills, especially cooking and baking. If you asked Leona, she would quickly tell you that only she could cook dishes that were actually edible! She enjoyed playing cards and creating ceramic pieces that she sold from a small store in her home. Leona also followed the political scene religiously and was not shy about sharing her opinions. She was an active member of Bethany Lutheran Church in Kaukauna until she and Roy retired and moved up north. Leona loved to laugh and loved to make others laugh.

Leona will be greatly missed by her two children: Rodney (Darlene) Woller of Gresham and Cindy Hoffman (Pat DuFrane) of Kaukauna. Her grandchildren are: Heather (Ryan) Siebers, Holly Hoffman, Timothy Woller, and Stacey (Kevin) Krake; seven great-grandchildren: Alexis Hoffman, Kalli Hoffman, Jorden Siebers, Hunter Siebers, Mason Krake, Jessie Krake, and Adam VanDenBogart (Kortney) and their daughter Braylie. She also leaves behind a sister: Jackie Pahls, as well as many nieces, nephews, other relatives and friends. She was preceded in death by her parents, her husband Roy, and sisters Marion, Dorothy, and Virginia.

The funeral service for Leona will be held at 11:00 AM on Thursday, June 16, 2016 at BETHANY LUTHERAN CHURCH, 124 W. 10th Street in Kaukauna, with Rev. Walter Steinbach officiating. Etombment will follow at Highland Memorial Park. Family and friends are invited to gather at the church on Thursday morning from 9:00 AM until the hour of the service.