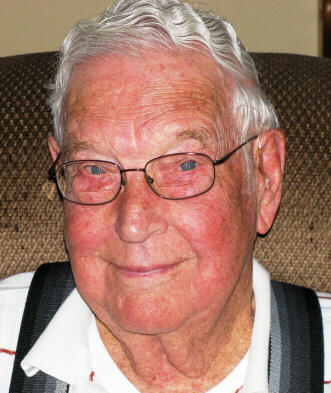 Age 87, passed away at ThedaCare Hospice Residence on Sunday, November 13, 2011. He was born to Leon Shreve Patterson and Mildred Buckley Patterson on their farm in Green County, near Brooklyn in Southern, WI on January 3, 1924. He attended country school, followed by High School in Evansville, WI. After graduation he was engaged in farming.

On January 15, 1949, he married Audrey Anderson. After his tour of duty with the U.S. Army the couple settled in Evansville, where their two children, Alice and Larry, were born. Leon held a variety of jobs in the Evansville area, including owning a filling station, and working as a State Farm insurance agent for seven years. In 1964 the family moved to Appleton, WI, and he became a sales representative for the wholesale plumbing supplier, Baker Mfg. Co. where he was employed until his retirement in 1988. After retirement he and his wife spent many winters in Casa Grande, AZ.

Leon belonged to the First Congregational Church of Appleton. He also held memberships in Union Lodge #32 F&AM of Evansville, and Columbia Chapter #29 OES of Evansville, with dual membership in Fidelity Chapter #94 OES of Appleton, the Appleton Shrine Club and Beja Shrine of Green Bay. He was very proud to be a Shriner, and he worked tirelessly for the Shrine Hospitals. Friends and others may remember him driving his red, 1949 Jeepster in many Shrine parades.

A Masonic service followed by a memorial service and military honors will be at 6:30 p.m. on Sunday, November 20, 2011 at the Wichmann Funeral Home, Tri-County Chapel. Friends will be received at the funeral home on Sunday from 4:30 p.m. until the time of the service. Interment will be in the Maple Hill Cemetery in Evansville, WI.

In lieu of flowers, memorials may be given to the Appleton Shrine Club. Proceeds will go the Shriners Childrens Hospital.