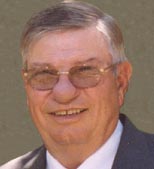 Leon Ashauer passed away peacefully on Monday, June 26, 2006 at St. Elizabeth Hospital in Appleton. He was born in Appleton on April 13, 1927, son of the late Anton and Lucille (Laux) Ashauer. On February 1, 1947, Leon married the former Carol J. Reinholz; she survives. As a young man, he began helping his father in the family business, Ashauer Distributors, a well-known beer distributor in Kaukauna, which later became known as LBJ Distributors in Little Chute. He worked in the family business most of his life. For a time, he served his country as a member of the United States Navy. Leon enjoyed golf, and was a member of the Fox Valley Golf Club. He was also a member of Holy Cross Catholic Church where he once served as president of the Holy Name Society, the Kaukauna American Legion, and the Electric City Post #3319 of the V.F.W. He enjoyed sports of all kinds, including bowling, softball, snowmobiling, playing cards, cheering for the Packers and the Brewers, working crossword puzzles, and doing jigsaw puzzles. Leon also loved to care for and feed the many birds that visited his yard. He will be remembered for his love of spending time up north at the cabin near Mountain and traveling with Carol. He also enjoyed refinishing and repairing furniture, as well as tinkering with broken radios and televisions.

The funeral liturgy for Leon will be held at 11:00 AM on Thursday, June 29, 2006 at HOLY CROSS CATHOLIC CHURCH, 309 Desnoyer Street in Kaukauna with Fr. Jack Mullarkey officiating. Interment will be in Holy Cross Cemetery. Friends may call at the funeral home on Wednesday from 4:00 PM until 8:00 PM and again Thursday at the church from 10:00 AM until the hour of the service. There will be a parish prayer and scripture service at 7:30 PM Wednesday at the funeral home.