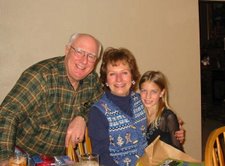 Age 64 of Townsend, was born to eternal life on Thursday, April 9, 2009 at Appleton Medical Center, after a long, courageous battle with Leukemia. He was born in Manitowoc on May 24th, 1944 to the late Julius and Bernice Stehula. The family moved to Brillion and began the Brillion Bottling Company where Lee helped from an early age. At Brillion High School, he excelled in track and baseball, graduating in 1962; he attended the University at Stevens Point for a semester before returning to the family business. He married Mary (Jo) Ortlieb on October 17, 1964 at St. Augustine's Catholic Church, Chilton. Lee joined the Brillion Police Dept., was on the fire department and worked part-time as an assistant game warden before moving to the Appleton Police Dept. in 1970, where he progressed through the ranks, retiring as a Lieutenant in Investigative Services in 1999. They moved to Townsend and became active in the community. Lee was involved in the Lions Club where he chaired the Holt Balcom Logging Camp committee; and volunteered at the local elementary school. He was president of the Red Arrow Snowmobile Club. The family loves the northwoods, having owned property there since 1982, where Lee enjoyed outdoor activities including hunting, fishing, boating and campfires with his family.
Lee and Mary have 3 children: Brian, (April), of La Crosse; Mark (Sue) of Appleton and Kris (Jeremy) of Appleton and 5 grandchildren: Mitchell, Forrest, Megan, Autumn and Alaina. Siblings include Dave (Karen) of Appleton, Helene (Dale) of DePere and Ed of Reedsville, nieces and nephews.
A Memorial Mass will be held for Lee on Saturday, April 18 at 11 a.m. at St. Mary of the Lakes Catholic Church, Lakewood; Visitation begins at 9 a.m. The Rev. David Schmidt will officiate.
In lieu of flowers, a memorial fund will be established.
The family extends a special thank you to the staff of AMC, especially 3 South and Outpatient Services, and Fox Valley Hematology & Oncology for their wonderful care and compassion toward Lee and his family. We also want to thank our wonderful friends and family, whether in the valley or “up north” for their continued support, love and prayers over the last two years.