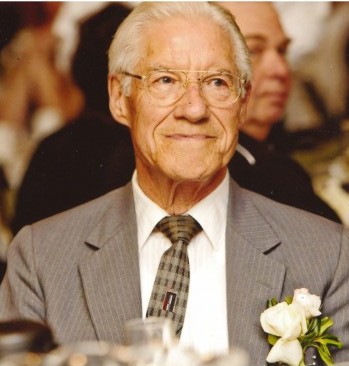 Leon C. Lauer, age 91, passed away on Sunday, December 29, 2019, 21 years to the day after his wife of 47 years, Elizabeth Lauer, passed away. Leon was born on September 16, 1928, son of the late John and Magdalen (Kettner) Lauer. On April 21, 1951, he was united in marriage at St. Mary Catholic Church in Menasha to his best friend and soulmate, Elizabeth “Betty” Endres. Together they raised 12 children. After Elizabeth passed away in 1998, Leon married Elizabeth “Beth” Gibbons.

Leon worked as a machinist and welder at American Can until his retirement in 1992. He was a talented musician, woodworker, craftsman, gardener, cook and baker. Leon’s faith was paramount in his life and he was a parishioner at St. Mary Catholic Church in Menasha for nearly 70 years. He was a passionate accordion player, even playing with the “Polka King” Frankie Yankovic, recording an album with the Zittau Zippers, and later being inducted into the Wisconsin Polka Hall of Fame. He was an active member of the Accordion Club and Small Engine Club. He was the glue that held together many local jam sessions. Leon also was a Brewers, Packers and Badgers fan. Most importantly, Leon was honored to be the family patriarch and proud of his children and grandchildren and generous with hugs and “Love You” sentiments.

A communion service for Leon will be held at 1:30 PM on Saturday, January 4, 2020 at St. Mary Catholic Church (528 Second St., Menasha) with Deacon Don Schultz officiating. Visitation will be held from 10:30 AM until the time of service.