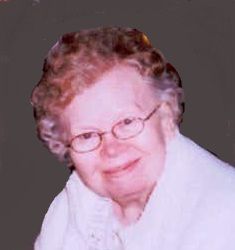 Leola Eastman, age 85, of Appleton, passed away at Brewster Village on Thursday, February 14, 2013. Leola was born on July 4, 1927, in Appleton, to the late John and Loretta (Mollett) Bauhs. She was well-known as a cook at Babe Van Camps Supper Club, was a Jail Matron for Outagamie County for many years and was also a former employee of the Zwicker Knitting Mills. Leola enjoyed cooking and baking for her family and loved to read.

Funeral services will be at 11:00 a.m. on Wednesday, February 20, 2013, at ZION LUTHERAN CHURCH, 912 N. Oneida Street, Appleton, with Rev. Ken Schulueter officiating. Friends may call directly at the church on Wednesday from 9:30 a.m. until the time of services. Interment will be in Riverside Cemetery. The family would like to extend a sincere thank you to the staff at Brewster Village, especially to the staff on the Mills Wing for their decade of kindness, compassion and loving care. A memorial has been established in her name. Online condolences may be offered at www.wichmannfargo.com