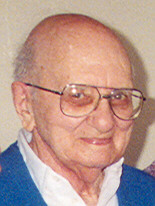 Age 85 of Appleton passed away on Mon. Feb 21, 2005. He was born on Nov. 4, 1919 in Marshfield the son of the late Christopher and Cecelia (Brusky) Getsfried. He served his country in the U.S. Army Air Corps. during World War II. On Oct. 4, 1947 he married his High School sweetheart, Jean Rhoder in Appleton. He was employed at Allis Chalmers as a machinist for 42 years retiring in 1982. Leo was a true pioneer in his work and as a hobbyist. He designed and built model airplanes and boats. His most noteworthy project was his propeller driven iceboat. He was a lifetime member of the Valley Model Airplane Club.
He is survived by his wife Jean of Appleton, his daughter Chris (Dick) Holz of Shiocton; Leo James (Jeanne) Getsfried of Mankato, MN; David (Lisa) Getsfried of West Bend, WI; his grandchildren: Julie (Wayne) Nadolske of Colorado, Stephanie (Brian) Yun of OR, Amy Holz of Neenah, Louis Getsfried of MN, Nicholas Vorderbruggen and Katrina Getsfried both of West Bend; three great grandchildren: Kylie and Payton Williams of Neenah; and Kira Yun of OR; his three sisters: Margaret Getsfried, and Estelle Martin both of Appleton, and Delores Dorsey of Green Bay; and numerous nieces and nephews. He was preceded in death by one brother, Ray (Alice) Getsfried, three sisters: Frances (Homer) Earl, Kathryn (Arnie) Ganzen, and Florence (Bert) Staples; and his brother-in-law James Dorsey.
A funeral service for Leo will be conducted on Friday, February 25, 2005 at 11:00 AM at Wichmann Funeral Home with the Rev. Kent Ingram officiating. Interment will take place at Riverside Cemetery. Friends may call at the funeral home on Friday from 10:00 AM until the time of the service. A memorial fund is being established.