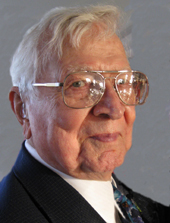 Age 96, died peacefully on February 15, 2014, surrounded by family and close friends, in the same Kaukauna, Wisconsin home in which he was born and resided his entire life, except during his Army service in the Pacific during World War II.

Born May 17, 1917 to Edward G. and Lucy King Driessen, his graduation from Kaukauna High School in 1935 was followed by employment never farther from his front door than one block: short order cook, banker, co-owner of a hardware store and, finally, joined the Wisconsin Gas Company from which he retired as District Manager in 1982.

Wed to Frances Hopfensperger in 1946, she preceded him in death in 2004. Also preceding him was a son, Christopher along with his seven siblings and their spouses: Everett (Julia), Quentin (Helen), Lozelle (Jule) Schommer, Margaret (Ronald) Reetz, Robert (Marion), Norbert “Nub” (Ann), Floyd (Marian).
Leo was a true Renaissance man who never stopped learning through voracious reading and constant involvement in activities. Where modern technology is concerned, Leo learned the basics of email and the internet but, generally, left those to his grandchildren. Beyond being an exceptional carpenter, renovating 119 Doty Street throughout his life, he was an expert gardener and soup maker.
Serving nearly 3 years of WWII in the Pacific, honorably discharged in 1946, and later joining the Army Reserves, he retired from the Army in 1967 at the rank of Command Sergeant Major.

Prior to his 1982 retirement from Wisconsin Gas Company (now WE Energy)he taught himself the art of wood carving and, over the subsequent years, created a multitude of stunning works of art that continue to enhance the beauty of churches, libraries, city halls, and businesses and homes throughout Wisconsin and beyond. He was able to enjoy his woodworking into his 95th year.

Following his retirement as district manager for the Wisconsin Gas Company, Leo became heavily involved in “his” community and hometown. Along with his friend and fellow retiree, Marvin Schumacher, Leo enlisted the skills and aid of a group of other retirees who built the first story of our current Kaukauna Chamber of Commerce. Beyond that, Mr. Driessen was instrumental in the establishment of part one of Kaukauna's Industrial Park, promoting it and encouraging businesses to relocate to the area. Leo helped raise funds for a number of projects in Kaukauna including Kaukauna's Friends and Family sculpture garden and the KHS's Galloping Ghost bronze. Along with his good friend Oscar Boldt, Leo was a founding member of the Fox Valley Community Foundation and, in his spare time, pursued a newfound love of opera. Devoted to family, community and country, he was active in Rotary International for 45 years, served on the Kaukauna School Board and several hospital boards, while lovingly conveying his passions and skills to his children and grandchildren.

Leo eagerly embraced life and all the opportunities and challenges it offered, accepted difficulties and painful losses, and epitomized his belief that people don't stop playing, working and learning because they get old, they get old because they stop.

The family offers heartfelt gratitude to Dr. Jack Meyer for his many years of doctoring and befriending Leo, as well as Bright Star Home Care whose loving assistance allowed Leo to remain in his home for the last eight months of his life–dying where he'd been born 96 9/12 years ago–in particular Carol Brauer and aides, Michelle, Ina, Diane and Shantal. We also extend our gratitude to Affinity Visiting Nurses and Hospice, for all their help over the last 2 months of Leo's life, especially the PT, OT and volunteer staff, Social Workers and RNs especially Shelly, Tracy, Barbie, and Cass; dear friends Tom Nelson and Mike Weaver—who is Senior Ride Captain for the Patriot Guard Riders.

A memorial service for Leo will be held at 6:00 PM on Friday, February 21, 2014 at Holy Cross Catholic Church in Kaukauna, with a reception to follow. Family and friends are invited to gather at the church on Friday afternoon beginning at 4:00 PM.