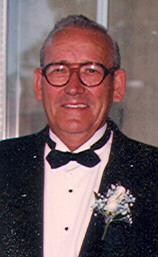 Age 83, passed away in Appleton on Wednesday, December 07, 2005. He was born in Kaukauna on September 9, 1922, son of the late Michael and Jenny (Vaubel) Donnermeyer. Leo served in the United States Army during WWII and fought in the Battle of the Bulge. On July 9, 1960 he married Janice Wolf in Brillion. Leo worked his entire career at Appleton Papers, Locks Mill, for 38 years. Leo's hobbies included being an avid golfer, hunting and fishing, and spending time with his family at his cottage at Lake Noquebay.

The memorial service will be at 6:00 p.m. on Friday, December 9, 2005, at the Wichmann Funeral Home, Tri-County Chapel, Menasha, with Rev. Mark Geisthardt officiating. Friends will be received at the funeral home from 4:00 p.m. until the time of the service. A military honor service will be conducted by the Jacob Coppus Post of the American Legion.

The family extends their sincere gratitude to the staff at Franciscan Care for their compassionate care of Leo.

A memorial fund in Leo's name is being established.