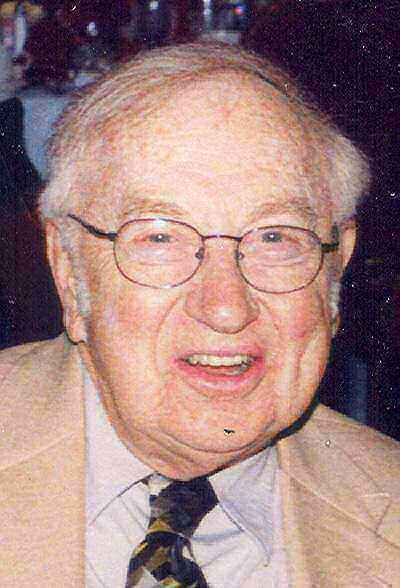 Leland Dor√© Ester, age 77, of Appleton, died on Thursday, April 13, 2006, from the effects of Alzheimer‚Äôs Disease, at Brewster Village, where his beloved family and caring aides and nurses helped him, lovingly and gently, to leave this earth peacefully.

Lee was born on April 22, 1928, in Chicago, Illinois, the son of Reverend Dor√© and Mrs. Rosella Ester. Both of his parents and his brother, Richard, preceded him in death. Lee grew up in the small Illinois towns of Peotone, Kankakee and Barrington. In 1950, Lee graduated from North Central College, Naperville, Illinios. After graduation he traveled in Europe twice, as a young tourist and during the Korean War with the United States Army.

Lee began his career as a newspaperman at the Chicago City News Bureau, then worked for newspapers in Pocatello, Idaho, Battle Creek, Michigan and Des Moines, Iowa, as a reporter, managing editor, and editorial writer. Following those years, he served as Public Relations Director for Lawrence University and for the University of Wisconsin‚ÄîFox Valley.

Lee served on the Boards of Directors for the United Way, Salvation Army, Fox Valley Symphony, Appleton Arts Alliance, Wisconsin Public Radio and Memorial Presbyterian Church as well as other community organizations. He was a faithful member of the Appleton Morning Kiwanis Club for nearly 30 years. In retirement, Lee volunteered as a Red Cross shopper and for Meals On Wheels, and was a tutor for the United for Reading program. He was also founder of the Appleton chapter of Torch Club International.

Lee loved fishing for trout in Idaho and in the Mecan River, writing newsletters for Kiwanis and the church, making ice cream with his grandchildren, reading, singing in the choir, helping his daughters find the right word to use in their studies and work, playing the recorder and going to concerts. Lee was gentle and un-assuming, easy to love. He will be missed.

Memorial services will be at 11:00 a.m. on Friday, April 21, 2006, at MEMORIAL PRESBYTERIAN CHURCH, 803 East College Avenue, Appleton, with Rev. Charles Valenti-Hein and Rev. Roger Bertschausen officiating. Friends may call at the Parlor at Memorial Presbyterian Church on Thursday from 5:00 p.m. to 7:00 p.m. In lieu of flowers, memorials can be given in his name to the Fox Valley Symphony or to Memorial Presbyterian Church, to be used for the music program.
WICHMANN FUNERAL HOME
537 North Superior Street
Appleton 920-739-1231
www.wichmannfuneralhomes.com