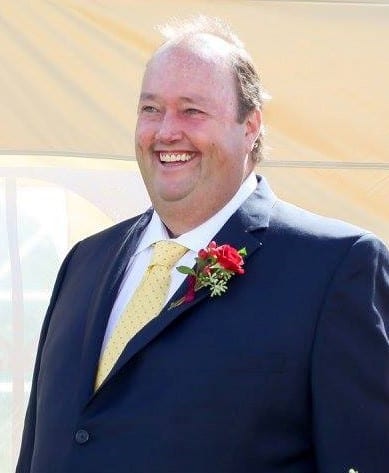 Lawrence L. Dorn Jr. (Big Larry, “The Legend”), 58, of Menasha, WI, passed away on April 25, 2020 in Appleton, surrounded by his family. Larry was born in Appleton to Lawrence Dorn Sr. and Dolores Dorn on February 14, 1962. He graduated from Xavier High School in 1980. He worked a variety of positions for Dorn’s Delivery & Transfer before taking over the family business, which he owned until his passing.

His spirit for fun, bringing people together, and hospitality, brought him into a variety of business ventures including the Starlite Club (Kaukauna) and Valley Liquor (Little Chute).  Larry was extremely passionate about helping people and helped raise over one million dollars for the Children’s Hospital of Wisconsin among numerous other charities and causes. He helped found the Darboy Optimist Club, was a board member of the Outagamie Country Tavern League, Outagamie Country Traffic Club, KASA, & various other organizations. Larry’s volunteer work did not end there, he also coached all of his children in soccer. Larry was known in the community for his kindness and generosity. His willingness to help everyone, friendliness, and laugh will be missed by so many.

Larry had a larger than life attitude and a contagious smile, He brought joy to so many, his sense of humor and knack for being the life of the party made him the favorite among friends and family. He truly lived by his nickname “The Legend”, because, if you were around him, you were having a good time. Larry loved with all his heart, especially his children and grandchildren and enjoyed time with family, golfing, sports, attending events, traveling, meeting people, and most of all living every moment to the fullest. Although his time was cut short, he lived a fuller life that most.

Larry’s family extends our sincere thanks to the staff at Touchmark on West Prospect, especially his main caregiver Sandra Christianson, as well as his dear friend, Steven Miller (Brillo) of Appleton.

Due to COVID-19, Private funeral services will be held on Thursday, May 7, 2020 at Sacred Heart Catholic Church in Appleton. Livestream services will be available for all to join on Thursday May 7, 2020 at 5:00 PM on wichmannfuneralhomes.com. Larry will be laid to eternal rest at Highland Memorial Park in Appleton at a later date. A LARGE celebration of life will be held at a later date. In lieu of flowers, donations will be collected at the celebration of life for Children Hospital of Wisconsin in order to continue the legacy he began.