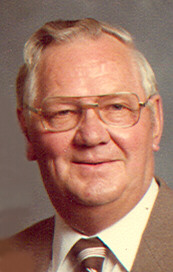 Age 81, passed away at Colony Oaks Care Center on Friday, May 2, 2008. He was born in Appleton on November 14, 1926 the son of the late Charles and Agnes (Novak) Sonnleitner. On May 19, 1979 he married Eleanor Brown at Good Shepherd Lutheran Church, Appleton. Larry was one of the last employees at the original Adler Brau Brewery and later worked for Kimberly Clark, retiring in 1990. He was a member of the South Side Athletic Club and served as Athletic Director for many years.

The funeral service will be at 11:00 a.m. on Wednesday, May 7, 2008 at GOOD SHEPHERD LUTHERAN CHURCH, 2220 E. College Ave., Appleton, with Rev. Martin E. Koeller and Rev. Timothy Seabaugh officiating. Friends will be received at the funeral home on Tuesday, May 6, from 4:00 p.m. until 8:00 p.m. and at the church on Wednesday from 9:00 a.m. until the time of the service. Entombment will be in Appleton Highland Memorial Park.

In lieu of flowers, a memorial fund in Larry's name is being established.

The family extends a special thank you to the staff at Colony Oaks Care Center for their care and compassion.