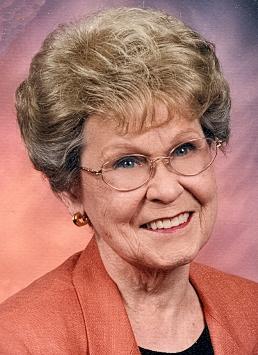 On Wednesday morning March 9th 2011, LaVerne M. Jeffrey was called by her shepherd to begin her new life. LaVerne was born on February 21, 1932 to the late Peter E. and Barbara (Nabbefeldt) Van Dyke. She was a graduate of St. Mary's Grade School and Kaukauna High School, class of 1950.

Upon graduation she moved with her parents to Miami, Florida, working as a legal secretary and for a City Commissioner. Returning to Kaukauna in 1955 she held a secretarial position at Giddings and Lewis and was Administrative Assistant to the President of Badger Northland until her marriage to Dr. James S. Jeffrey on September 18, 1971. Laverne's family now increased to 7 as Dr. Jeffrey was a widower with six children, ranging in age from 5 to 16, after loosing his wife, Shirley (Iggulden) Jeffrey to cancer in 1970. After the children were raised she worked as a realtor for Coldwell Banker.

LaVerme was very involved and dedicated to the Green Bay Diocese Cursillo Movement and served on the board, Marriage Encounter Weekends and Marriage Preparation for young couples. In the late 80's she was a member of the St. Paul Home Development Council to build a new facility next to the Kaukauna Hospital. She chaired the Committee which developed the Annual Appeal Fund which remains St. Paul's only on-going major fund-raising activity to this day. Along with her volunteer work with UNICEF, American Cancer Society, Meals on Wheels, she served the Kaukauna Community Hospital Auxiliary as President three terms.

After Dr. Jeffrey's retirement in 1994 they moved to Ouray, Colorado where she became involved in the Stephen Ministry Program through her church, was on the Ouray Performing Arts Guild Board, member of the Ouray Women's Club and helped form the San Juan Chapter of AARP for Ouray County. They returned to Wisconsin in 2002 because of health issues. Ouray was Jeff and LaVerne's Camelot and they spent eight beautiful and peaceful years there enjoying God's beautiful mountains.

LaVerne was preceded in death by her parents, her step mother: Elizabeth (Johnson) Van Dyke, her stepson: James Jeffrey; her step-daughter: Amy Huber; her brothers and sisters and their spouses: Merlin (Vera) Van Dyke of Oshkosh, Floyd (Agnes) Van Dyke of Kaukauna; Angela (Frank) Hietpas of Shawano; Virginia (Alvin) Graf of Oshkosh and Robert LeMay, a brother-in-law killed in action during World War II; 19 fun loving aunts and uncles and their spouses.

The funeral liturgy for LaVerne will be held at 11:00 AM on Wednesday March 16, 2011 at ST. KATHARINE DREXEL PARISH – ST. MARY'S CHURCH, 119 W. 7th Street, Kaukauna with Fr. David Beaudry and Fr. Bob Lexa co-officiating. The family will greet friends and relatives at the Fargo Funeral Home, 400 W. Wisconsin Avenue, Kaukauna on Tuesday March 15 from 5:00 to 7:00 PM and at the church on Wednesday from 10:00 AM until the time of mass.

The family would like to extend a special thank you to Theda Care at Home Hospice for their care for LaVerne.

And to so many who held our hands, warmed our hearts and helped us through so much when we could not be there, we say thank you and God Bless You. You know who you are.

A memorial fund is being established in her name to Theda Care at Home Hospice.