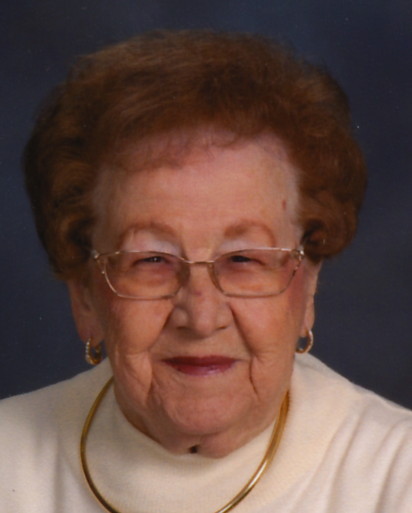 LaVerne Gerl was called to the arms of her waiting Lord on Saturday afternoon, March 29, 2014. LaVerne was born in Cleveland, Wisconsin, on November 21, 1919, daughter of the late George and Judith (Voss) Edler. As a young woman she worked at Wilber's Jewelry Store in Sheboygan, and on February 10, 1947 married Arthur Gerl at Holy Name of Jesus Catholic Church in Sheboygan. Her cousin, Fr. Charles Fredericks, performed the ceremony. The couple moved to Appleton, where LaVerne began work at the Appleton Public Library where she was employed for twenty-three years, retiring in 1986. LaVerne and Art spent forty-eight wonderful years together, until his passing on November 5, 1994. LaVerne was a longtime and faithful member of St. Mary Catholic Church in Appleton, and enjoyed volunteering at the polls for many public elections.

LaVerne is survived by a bother: Arthur Edler of Howards Grove; a sister: Bernadine Kuester of Sheboygan; a sister-in-law: Audrey Johnson of Shiocton; as well as many nieces and nephews. She was preceded in death by her parents, her husband Art, her siblings: Marjorie (Joseph) Schwoerer, Ruth Portmann, Carol (George) Petermann, and Eugene (Doris) Edler; sisters-in-law: Delilah Edler, Jean Lindahl, and Claudia (Allen) Gray; brothers-in-law: Delbert Kuester and Elmer Johnson; and a very special niece, Jane Portmann.

The funeral liturgy for LaVerne will be held at 1:00 PM on Friday, April 4, 2014 at ST. MARY CATHOLIC CHURCH, 312 S. State Street in Appleton, with Fr. James Leary, OFM Cap. officiating. Entombment will be in St. Joseph Cemetery. Family and friends are invited to gather at the church on Friday from 12:00 Noon until the time of the mass. In lieu of flowers, a memorial fund is being established for St. Joseph Food Program in Appleton.

LaVerne will be buried in her husband Art's World War II naval uniform. It was redesigned for her after he served his tour of duty.