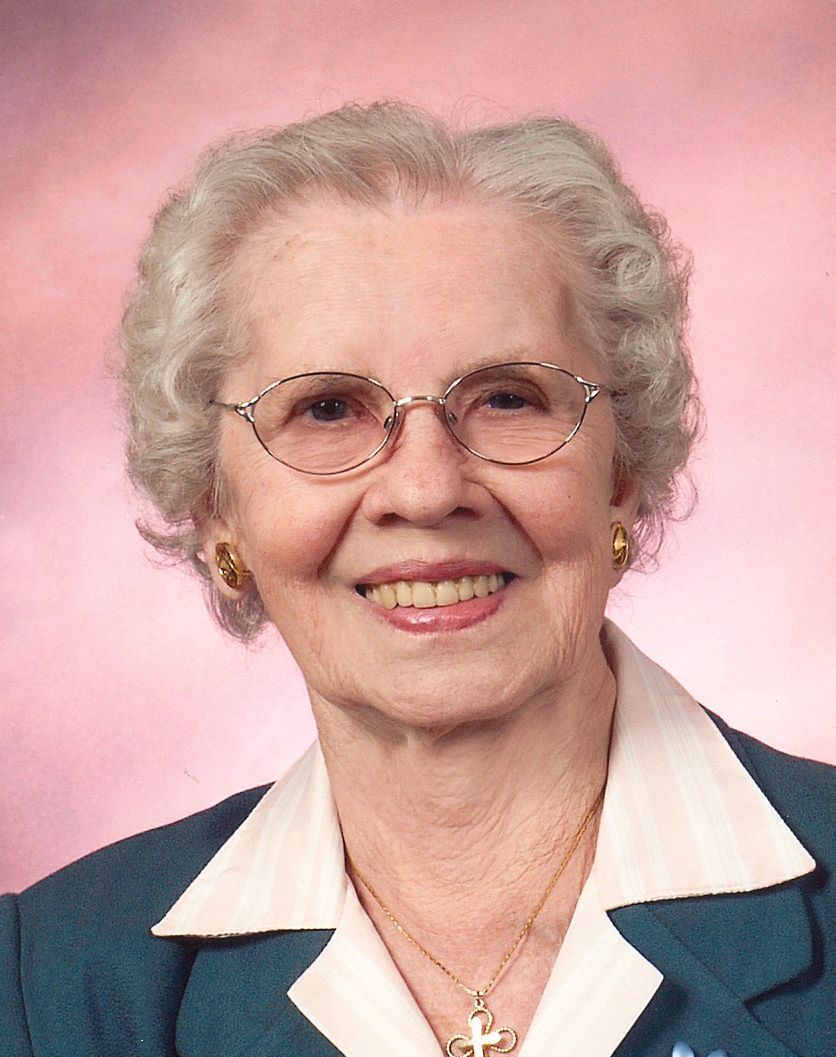 LaVerna M. Artz, age 95, passed away on Tuesday, August 18, 2015 at Grand Horizons in Appleton. LaVerna was the fourth generation born on January 30, 1920 on the Schroeder family farm homestead in the Town of Rockland, Collins, daughter of the late John and Hattie Schroder. She was baptized and confirmed at St. Paul's Evangelic Church in Collins, Wisconsin. On December 27, 1941 she married Ervin James Artz at St. Peter's Lutheran Church in Collins. They lived in Kaukauna and enjoyed 58 years together before Ervin passed away on July 15, 1999.

After raising her family she became custodian for Bethany Lutheran Church for 25 years along with her husband, Ervin. They took great pride in keeping the church and grounds in meticulous order. They were members of Bethany since the mid 1940's. She was an active member for years through her church with the Ladies Guild and was honored for 25 years of service with a surprise church gathering in 1976. A few years later she was nominated by the guild members as Woman of the Year. She served on Ladies Guild for over 60 years and Altar Guild for over 40 years. She was very engaged in holding 38 chili suppers through the church. She taught Sunday School and Vacation Bible School for 10 years and served as the Sunday School Superintendent. She helped with missions through sewing and volunteered time at the Bethesda Thrift Shop. She served on the Memorial Committee and kept historical records for the church. LaVerna loved to read, especially her Bible, do crossword puzzles, sew, and WALK! She made over 100 quilts from crib size to queen size for her family as well as for missions through the church. She also completed a memorial quilt for her deceased daughter-in-law, Darlene Artz.

Mom was known for loving her family and her church and spent most of her spare time there. She was an excellent role model for her two children, eight grandchildren, and 23 great grandchildren. She left us a legacy of how important it is to have a strong faith, live good values and live the simple life with gratefulness. We loved you dearly and will keep you in our hearts forever! Mom loved being a Mom, Grandma, Great Grandma, church volunteer and confident friend to many. She cared deeply for many and gave of herself to be there for others. You will be deeply missed by your family and friends.

Survivors include her daughter Carol (Ron) Peterson of Appleton; son Jerry (Judy) Artz of Appleton; eight grandchildren: Rachel and Steve Lallensack of Richfield, Rebecca and Scott Dawson of Chilton, Jon and Shannon Peterson of Hilbert, and Jim and Amanda Peterson of Appleton. Jerry and Darlene have four daughters: Debbie and Keith Urban of Kimberly, Dianna and Don Lemke of New London, SueAnn and Jason Young of Appleton, and Jennifer and Kevin Schissser of New London. LaVerna also has 23 great grandchildren who all loved sitting on Great Grandma's lap. Jerry's wife Judy also has six children. Everyone had to have their picture taken with Great Grandma and she thoroughly loved each one and they in turn thought she was the Greatest Great Grandmother!!!

She is further survived by one step sister-in-law, Virginia Hintz of Two Rivers; one step brother-in-law, William Artz of Manitowoc; step sisters-in-law Mary Ann Artz of Nevada, and Heidi Artz of Michigan, and Beatrice Artz of Clintonville.

Funeral Services will be held at 11:00 a.m. on Friday, August 21, 2015 at BETHANY LUTHERAN CHURCH, 124 W. 10th Street, Kaukauna, with Rev. Walter Steinbach and Rev. Levi Willms officiating. A time of visitation will be held at the church from 9:00 a.m. until the time of the funeral. Burial will be in Kelso Cemetery, Kaukauna. In lieu of flowers, a memorial fund has been established in her name. Online condolences may be offered at www.wichmannfargo.com.

A very special thank you goes to AseraCare and Grand Horizons staff that have given Mom wonderful care and loved her like family.