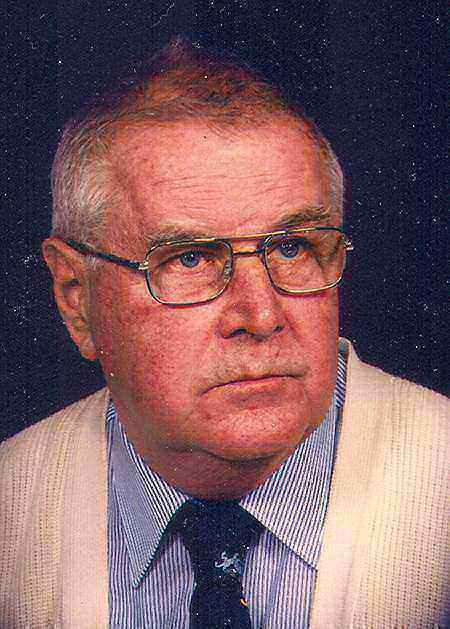 Lawrence J. Piette
Age 88
Of Appleton, died on June 5, 2004 at home surrounded by his family. Larry was born in Appleton on March 18, 1916 to Charles and Josephine (LeCapitaine) Piette. He was the youngest and last surviving child in the family. Larry was a life-long resident of Appleton except for the four years he served his country in World War II.

On June 28, 1946 he married Claire Marin deGravelles at the Church of the Assumption in Franklin, Louisiana. This union was blessed with four sons and three daughters. Marin preceded him in death in January, 1969. On June 1970 he married Jeannette deGravelles at St. Mary‚Äôs, Appleton.

Larry was a lifelong member of St. Mary Parish, Appleton, having served the parish as Trustee from 1953 to 1991. He was also a visitor to those hospitalized and to the homebound of the parish, bringing them Holy Communion and his own presence and interesting conversations. He also served on the Parish Council during his years as Trustee, was an usher, was President of the Holy Name Society (years ago), and served on various committees and drives. He was very proud to be on the Mooring House Board of Directors for many years. His love of children and of education prompted him, during his retirement, to volunteer as a tutor for the Hmong students at Jefferson School. His first love, though, was his family as he so often said, ‚Äú What else do we have besides family?‚Äù

Larry was preceded in death by his first wife, Marin, his parents, Charles and Josephine Piette, a son-in-law, Bill Lasse, siblings: Emma Piette Austin, James Piette, Dan Piette, Madeline Piette Thies and Pearl and Raymond who died in infancy. His in-laws from Louisiana who pre-deceased him were his mother and father in-law, Pete and Abbie Marin deGravelles and a sister-in-law, Mary deGravelles Moreau.

Larry served his country during World War II as an officer in an all-volunteer American and Canadian unit, the First Special Service Force (FSSF), a precursor of the Green Berets. Larry was a paratrooper and their unit was trained to jump into Norway and destroy the Germans‚Äô heavy water plant. This mission was canceled. Instead they were used in combat situations. Larry was overseas for about three years. He first went to the Aleutian Islands in the North Pacific where the FSSF conducted an amphibious assault on Kiska Island, only to find that the Japanese had abandoned it. They returned to San Francisco and shipped out to Africa, halfway around the world. He was at Casablanca. From Africa they went by boat to Italy and fought in the mountains. It was here that they took Mount Difensa. Larry was awarded the Silver Star for bravery in action at Mount Difensa. From there they made the push to Rome, including the landing at Anzio during which time Larry was wounded and received his first Purple Heart, the first of three. After being discharged from the hospital, his unit was sent to invade Southern France. The FSSF was there two days before the Landing in Southern France. They followed along the Mediterranean to the borders of Italy. It was here that he fought in the battle at Villeneuve-Loubet, a small city in Southern France. He was wounded at Grasse, France, the perfume center of the world. Before the battle, someone had given Larry a bottle of Chanel #5 which he had in his pocket, hoping to take it back to the U.S. When he was wounded, the perfume bottle broke and Larry always claimed to be the best smelling casualty of WWII. In addition to the Silver Star mentioned above, Larry was awarded the Bronze Star with clusters, the Purple Heart with clusters and six battle stars, and the Croix de Guerre with a gold and silver star at the French embassy in Norway. The citation was signed by General DeGaulle.

Following the war, Larry was employed by Kimberly-Clark Corporation as a Research Chemist and worked there until his retirement in 1978.

The family would like to thank Sr. Joanne Goessl, Fr. Mike O‚ÄôRourke and Fr. Bob Lexa for their care and concern; also the Affinity Hospice Staff, Beth, Astra, Molly, and Ellen during Larry‚Äôs last days and for his niece, Mary Jo Thies and nephew Eugene Piette who visited Larry often.

The Mass of Resurrection celebrating Larry‚Äôs life will be Wednesday, June 9, 2004 at 12:00 PM (Noon) at St. Mary Church (312 S. State St.), Appleton with Father Bob Lexa officiating. Visitation will be on Tuesday at the funeral home from 5 ‚Äì 7 PM with a prayer service by Sr. Joanne Goessl at 7 PM. There will also be one hour of visitation prior to the service at church on Wednesday. In lieu of flowers a memorial fund has been established for St. Mary Church. Burial will be at St. Mary Cemetery, Appleton.