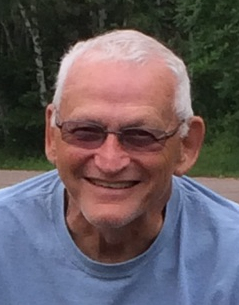 Larry Peroutka, 76 of Neenah, was called to heaven on Sunday, July 1, 2018, after an 8-year battle with cancer. During those 8 years he endured pain and discomfort, so we feel peaceful that his difficult journey has ended.

Larry was born on August 17, 1941 to Laddie Peroutka and Anne (Koci) Peroutka. He graduated from Phillips High School in 1959 where he was a star high school athlete. He held records in basketball and track and field that stood for many years. After high school Larry attended UW-Stevens Point and worked in Chicago before marrying his high school sweetheart Diane (Kempen) Peroutka, and they have enjoyed 55 years of marriage. Larry spent many years with George Banta Company and retired from Menasha Corporation in 1998. In his retirement, he worked for the fun of it at Dick’s Sporting Goods to support his fishing habit. His passions in life were hunting and fishing. Dad enjoyed fishing on Lake Michigan and spent a lot of time on the lakes in the area. Deer hunting was always a priority until just a few years ago. A favorite vacation was the week in Phillips at Hidden Cove Resort every year with his entire extended family.

A memorial service for Larry will be held at 5:00 PM on Monday, July 9, 2018, at Wichmann Funeral Home, Tri County Chapel, 1592 Oneida Street in Menasha. Family and friends are invited to gather at the funeral home on Monday afternoon from 2:00 PM until the time of the service. In lieu of flowers, a memorial fund is being established in Larry’s name.

The family would like to thank the doctors, nurses, and caregivers who supported Larry and his family along the way. Dr. Noelle Loconte, Dr. Tracey Weigel, Dr. Anthony Phillips, the staff at UW-Hospital and Clinics in Madison, Fox Valley Hematology and Oncology, ThedaCare Medical Center in Appleton, and the Hospice Residence at The Heritage. The kindness of these people was a great support to Diane.