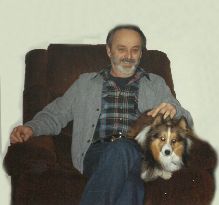 He graduated from Lincoln High School in 1962; and continued to keep in touch till his passing with his high school friend, Clarence Bradle. Shortly after graduating high school he joined the U.S Coast Guard. He proudly served between 1962 and 1966. He was employed with Foremost Farms as an electro-dialysis technician for thirty years and retired in 1996. He then was employed with Bergstrom as a driver for five years.

He is survived by his two sons, Richard Ware of Iowa and Alex Ware of Iowa; his sister, Iris (John) Eagan of South Carolina; his brother, Dennis (Kathy) Ware of Appleton and his two grandchildren. He is further survived by his former spouse, Margie Ware and his life-long friend, Clarence Bradle.

Larry was preceded in death by his parents, Lawrence and Evangeline Ware; his son, Mike Ware and his furry companion, Shep.
Services for Larry will be held in private with the family. They only ask that you keep them in your thoughts and prayers during this difficult time.

Larry’s family would like to thank the staff of both Garden View Assisted Living and Ascera Care Hospice for the wonderful and compassionate care given to him.