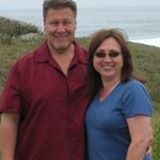 Kris William Knaus, age 53, of Menasha passed away peacefully in his home on September 26, 2014. He fought a brave and courageous battle against Kidney cancer for 6 months.
Kris was born on January 26, 1961 son of Joanne (Nesbitt) and Conan Knaus. He graduated from Appleton East High School in 1979. He worked for the Kimberly Mill for 28 years. Kris will be remembered for his larger- than- life personality with his booming voice, his love of family, his guitar, jazz music, golf and the Packers. He will be missed, but is forever alive in our hearts.
Kris is survived by his loving wife, Laurie Knaus (Meyer), son Zachary Knaus (Stephanie), daughter Jasmine Knaus, and three grandchildren Addaline, Olivor, and Flynn. He is further survived by his mother, Joanne Knaus and 5 sisters; Karen (Darwin) Hanson, Kathy (Odis) Hill, Kim (Bill) Knope, Kay Knaus (Bill Bast), Karrie (Mike) Mauel and many nieces and nephews. He is further survived by mother-in-law Elizabeth (Steve) Schroeder, stepmother- in-law Nancy Meyer, brother- in-law Todd (Tina) Meyer.
Kris was preceded in death by his father, Conan Knaus and father in law, Thomas Meyer.
A celebration of Kris' life will be held on Wednesday, October 1, 2014 at 4:00pm beginning at Waverly Beach N8770 Firelane 1, Menasha, WI.
The family would like to thank the staff at Theda Clark ICU and his oncologist Dr. Conkright. In lieu of flowers, a memorial fund will be established in Kris' name.