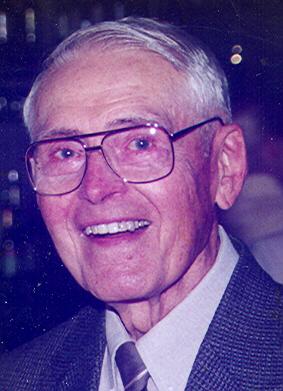 Kenneth R. Wink, age 94, of Appleton, died peacefully, Friday, June 16, 2006, at St. Elizabeth Hospital. He was born May 27, 1912, to the late Harry M. and Elenora W. (Hecht) Wink in Chicago and grew up in Milwaukee. Kenneth graduated from Washington High School, January 1930. Following high school he worked at Allis Chalmers for 1 ¬Ω years to earn money for college. While at the University of Wisconsin-Madison he worked to put himself through college. He received his Bachelor of Science degree, with honors, from the college of Engineering, University of Wisconsin, in1935.
After his graduation, Ken worked for Kimberly Clark as a research chemist, retiring in 1974. He was a member of TAPPI (Technical Association Pulp & Paper Industry).
On August 21, 1937, he married Margaret (Marge) Anderson at Trinity Lutheran Church in Kaukauna.
In the 1940‚Äôs and 1950‚Äôs, Ken was active as a scout leader for Troop 10 at Trinity Lutheran Church, Appleton. He served on the church council for many years. For the past thirty-six years he was a member of Our Saviour‚Äôs Lutheran Church, Appleton.
After retirement, Ken enjoyed working in his large vegetable garden.He was a very devoted husband, caring for his wife who had Alzheimer‚Äôs disease the last 10 years of her life. He was also a very caring and loving father to his three children and four grandchildren. He was proud to be a great grandfather.
Ken‚Äôs surviving family includes his son, James Wink, Sunnyvale, CA, daughters, Patricia (John) Bubolz, Appleton, and Nancy (Ronald, M.D.) Harrison, Punta Gorda, FL, grandchildren, Rebecca (Douglas, M.D.) Hempel, Whitefish Bay, WI, Kathryn Bubolz, Washington, D.C., David (Deborah) Harrison, St. Louis, MO, Michael (Cory) Harrison, McHenry, IL, great grandchildren Parker Hempel, Mikayla and Rebecca Harrison, Alex, Jordan and Taylor Harrison. His sister, Ruth Wink, West Allis, sisters-in-law, Louise Frank, Little Chute, Dolly Anderson, Menasha and Lucille Anderson, Kaukauna, and many nieces and nephews.
His wife, Marge, four brothers-in-law and three sisters in-law preceded him in death.
The celebration of Ken‚Äôs life will be at Our Saviour‚Äôs Lutheran Church, 3009 N. Meade Street, Appleton, on Thursday, June 29th at 11:00 am, with Reverend Dennis E. Ellisen officiating. Visitation will be at 10:00 am, until the time of the service. Memorials have been established for Our Savior‚Äôs Lutheran Church and The Salvation Army.

Ken was a gentle and kind man who always had a smile on his face for family and friends. He loved his last two years with many wonderful friends at The Heritage. A special thanks to Donna Bailey who helped him continue his daily walks in the park where he enjoyed nature. Also thanks to the professional and caring staff at The Heritage who helped make his new home so pleasurable.

A very special thanks to St. Elizabeth Hospital for the compassionate and professional care Ken was given during the last four days of his life. We treasure what all the staff on 2nd floor, West wing did for Ken and his family.